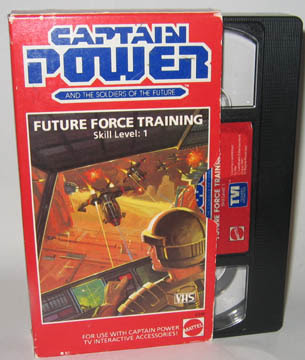 You are in control of the XT-7 as you'll be training for battle against Lord Dread and his evil machines in this 3-volume series of videos to aim your toys at.

In reality, I had never played or saw the show 21 years ago, but remember seeing the ads for this stuff though I never got around to thinking about those training tapes until now as they had been animated by AIC and Artmic. Shinji Aramaki is both mecha and background designer on these as well as Riding Bean's Yasuo Hasegawa as animation director.

Remember to check your Power Points!

This bright yellow package contains MUTANT VIDEO, so look out! Crazy entertainment from those edgy, with-it hipsters at the USA Network, this VHS tape promises cutting edge video type action that, it being the 80s, probably involves Devo or people wearing garbage bags. Well, never fear; this tape won't make you regret voting for Reagan or stop you from thinking that wearing sweaters on your back with the arms tied over your chest is pretty cool. What MUTANT VIDEO is, is short films. The kind of movies they used to run on "Saturday Night Live" or at film festivals or on NIGHT FLIGHT, coincidentally also owned by USA Network. Anyways, what you gots here is a proto-SubGenius film about people who are intensely religious about meat, a crazy juggling video that would be computer animated if they had invented computer animation yet, a not bad New Wave music act featuring "aliens", and an idyllic date gone horribly wrong because it stars Jim Belushi whose appearance anywhere automatically means "horribly wrong."

Other films include EXTENDED PLAY, which is very interesting as it's set in a video game arcade circa 1984 and features a video game shooting back and destroying the arcade with blood and explosions, and GRAVITY, which is a fake educational film all about how we're running out of gravity and we have to conserve it. You may have seen a slightly edited version of this shown on NIGHT FLIGHT. If you want the version with bare tits, MUTANT VIDEO is the tape for you!

The quality of the shorts vary widely. Some are Hollywood productions with professional lighting and acting, others are student films or proto-MTV videos, and the juggling thing is like something they'd run on Nickelodeon or Showtime between films back in the early cable days.

Apart from GRAVITY and about half of EXTENDED PLAY this video is nowhere near as 'edgy' or 'mutant' as it would like to believe. While these guys were telling each other how wild and out-there they were, David Lynch was shooting ERASERHEAD which leaves these films spinning in its confusing, murky dust. Most of these shorts could stand to lose about half their running time. In five years the home video revolution would enable every Tom, Dick, and Corn Pone Flicks to create short films that were goofier, bloodier, and shorter, and today you can waste an entire 8-hour workday gorging your eyeballs on short films via Youtube. Nevertheless, MUTANT VIDEO remains a quaint artifact of a time when great package design could sell damn near anything.

animehell
Posted by Unknown at 4:46 PM No comments: