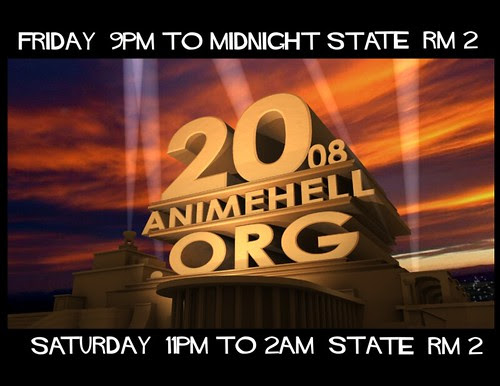 Two Nights! Two HELLS! Too Much!
We're scheduled for both Friday and Saturday night at A-Kon! More details as we get 'em...

animehell
Posted by Unknown at 8:49 PM No comments: 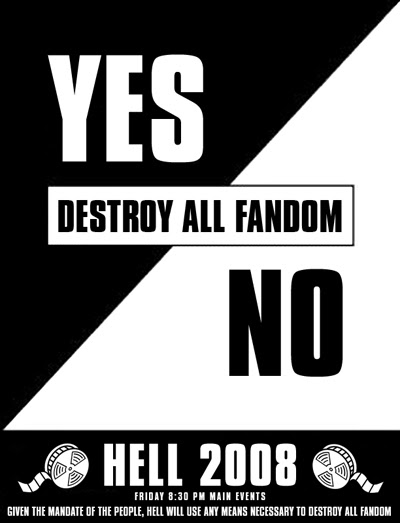 This year's Hell at Animazement went over like gangbusters, with a full house in the main events room having a good time and proving repeatedly that anime fans are essentially bloodthirsty sadists. I've posted the playlist on the Animazement forums. Kudos, as ever, to David Smith (who provided the KLF-inspired poster you see here), William Bloodworth, and Ben Elgin for doing their part to bring the Hell.

This Weekend: We got your Anime HELLs! 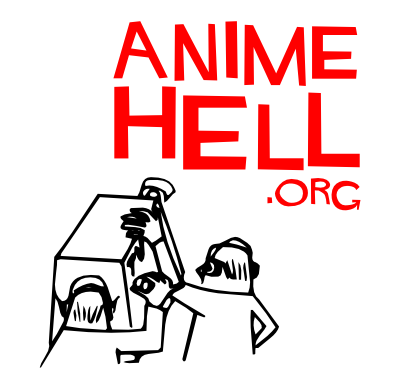 That's right. It's a cavalcade of HELL this Memorial Day weekend!

If you're going to Animazement you'll find Phil Lee and David Smith with a big slice of HELL this Friday night! And if you're at Anime North, Neil Nadelman will be knockin' them out with TOTALLY LAME ANIME!

If Neil doesn't drive you to despair you can test your nerves Saturday night with Dave Merrill's ANIME HELL! Meanwhile, across the continent, Ryan Gavigan serves up Anime HELL at Fanime Con! Not just Saturday night, but Sunday night, too!

It's more fun then you should be allowed to have with a group of strangers in a dark room!

animehell
Posted by Unknown at 12:39 PM No comments:

animehell
Posted by Unknown at 8:13 AM 2 comments: 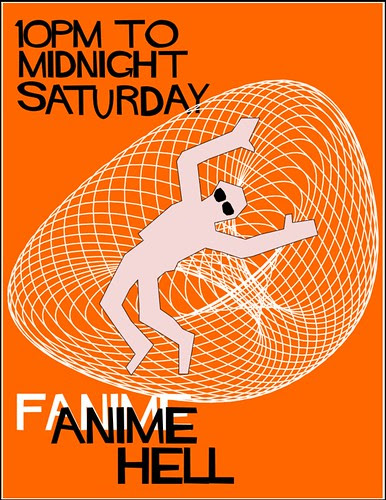 Email ThisBlogThis!Share to TwitterShare to FacebookShare to Pinterest
Labels: FanimeCon

This weekend was a double (possibly triple now that ACen has a Tokusatsu Hell) dose of Hell between JACON and Anime Central, so I figure I'll get mine out of the way first.

This was one of those times where you try and plan stuff in advance and it almost all goes out the window due to circumstances beyond your control. I guess this sort of thing is what con staffers go through on a regular occasion. As JACON was being held in a new location this year, the Ramada Orlando Celebration Hotel & Convention Center, I honestly had no idea what to expect, but an early warning sign was that the hotel would not let me post any of the flyers Danno designed anywhere.

The panel rooms and video rooms at JACON this year were TINY. I'd say there were about 50 seats. In previous years I estimate I'd fill about 30-40% of JACON's Main Events, which is a bit too large a room, so there definitely wasn't going to be enough room for everyone. The con staffers were very understanding of this, and the A/V accommodations were just what I needed so I had no need to go to the con gripe session.

But since the panel rooms were all in the same building and the panels opposite mine on the schedule was the hentai showing and Steve Bennett's party, my panel was now 18+ only. The downside to this was that my panel started about 45 minutes late since everybody had to be carded and there was one line regardless of which event you were attending. The upside was that I was able to run clips from UK Channel 4's Brass Eye by Christopher Morris, which with its copious amounts of nudity, profanity, and jokes about sex/drugs/religion/pedophilia is not something I generally show at AWA.

Other than that, the actual panel itself went off fine. I opened up with the Studio 4C animated music video for Koda Kumi's Twinkle (released a few years back as part of an anthology entitled Amazing Nuts!), before getting into the dark, dark, heart of matters. Lots of Speed Racer clips in wake of the live-action movie (which was awesome), though I spared the crowd from the currently-running Speed Racer: The Next Generation after subjecting them to The New Adventures of Speed Racer. Also present was a sizeable amount of kooky religious stuff, such as that Mormon animated propaganda video and Somebody Goofed. These clips are still funny ten years after I saw Dave use them. Between those, Brass Eye, Green Porno by Isabella Rosselini (Bee is my favorite), Silver Dragon Ninja (another Godfrey Ho NINJA epic), Golgo 13 selling Intel Core Duo laptops, and Jean-Claude Van Damme punching a snake in the face I'd say that those 50 or so people in attendance really wanted to be there. I chucked some DVDs and manga into the crowd since I had a huge box of stuff but quickly gave up once I realized that regular DVDs are just as aerodynamically likely to put someone's eye out as thinpacks. Wrapped everything up at 2 AM to make up for the lost time, and while I could have gone until 3 AM (the time everyone would get kicked out the building) if I started reusing old clips I decided I'd better try and get some sleep instead.

Big thanks to the JACON staff for doing what they could in a not quite optimal hotel room setup. All the technical stuff worked perfectly and without a hitch; I didn't even need to supply cables. If they don't switch hotels next year (and I'm kinda hoping they do), maybe the size of Main Events could be reduced to make room for one or two more larger event rooms.

animehell
Posted by Daryl Surat at 9:45 AM No comments:

Witness your DOOM at JACON 2008 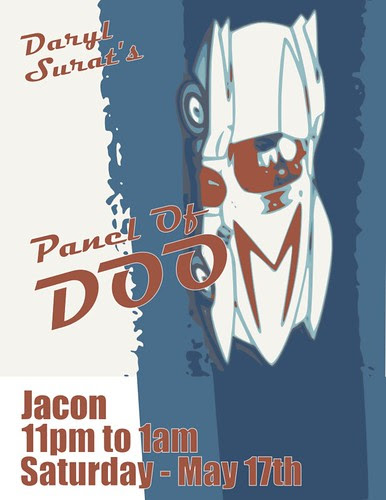 Although my posts here seem to have dwindled to about two a year (that's two more than I've managed to put in at Psychommu Gaijin!), you can rest assured that I've been reading every post. This year, the Panel OF DOOM! is back at JACON, only this year I'm getting back to my counter-programming roots! This Saturday night in Pelican C, at the official "You Should Be Drinking" time of 11 PM, I'm going the distance (for two hours anyway) and going for SPEED...Racer, that is!

animehell
Posted by Daryl Surat at 1:25 PM No comments: 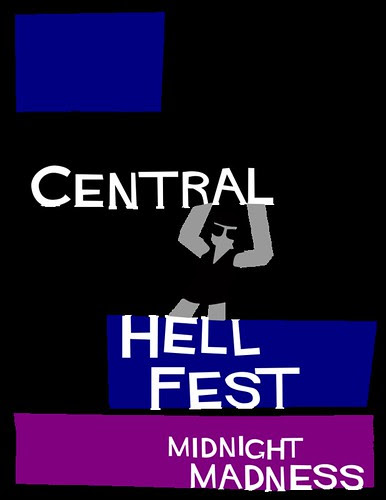 Just a short note to tell you about three panels I'm involved with at Anime North - not this weekend, but next weekend! 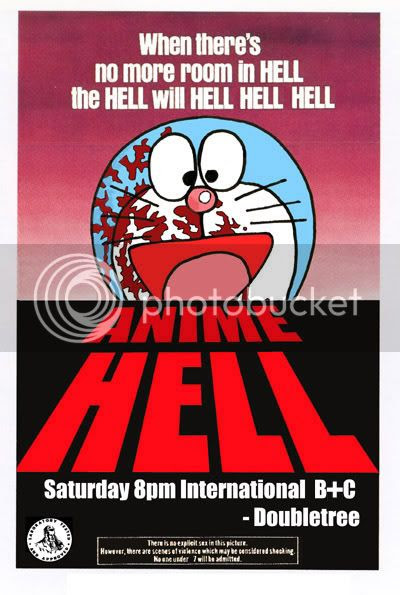 ANIME HELL - Saturday 8-10pm International B&C - returns to Anime North with one hundred and twenty minutes of questionable content, murky audio, and confusing ambiences! Trailers, short films, educational movies, forgotten anime clips, amateur films, odd commercials, and things that will make you say "what the hell was THAT?" all combine into a kalidescope of crazy that pummels your cerebral cortex into submission. Special surprise guest hosts!

SENSATIONAL SUPER ROBOTS OF THE SWINGING SEVENTIES: 1-3pm Sunday International B - Return with us to the grooviest decade of all as a parade of brightly colored giant super robots rampage through the popular culture of two hemispheres! Join Mazinger Z, Grandizer, Voltes V, Combattler V, Daitarn 3, Zambot 3, Steel Jeeg, Danguard Ace, Getta Robo, and all your other favorite super robots as they battle aliens from space and monsters from the depths of the Earth, burning all the while with the fires of justice! An educational presentation.

TOTALLY LAME ANIME: 6-9pm Friday International 'B' - Professional translator and all-around 'good guy' Neil Nadelman takes us on a mind-altering journey down a dimly-lit tunnel filled to the gunwales with some of the worst, least entertaining, poorly-animated, questionably-concieved animation ever produced. Who made this stuff? Were they brain-damaged, or just visually impaired? Learn the shocking facts about Totally Lame Anime... before it's too late! 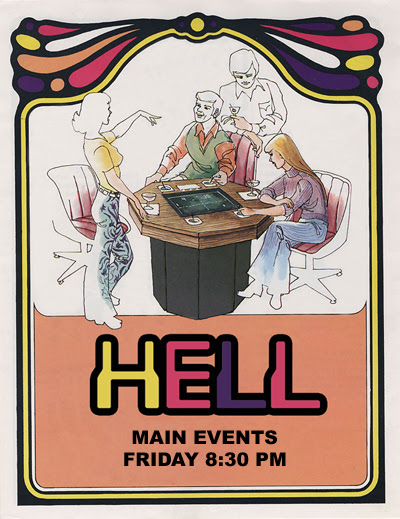 Once again, David Smith and myself will be bringing Hell to Animazement on Friday, May 23rd at 8:30pm in the main ballroom of the Sheraton Imperial. In an attempt to have the Friday night dance start at a semi-reasonable hour, Hell has been pushed back to 8:30pm this year. This strikes me as a tad early, but the content will be just the same and hopefully the entire con won't be out to dinner at that time. Either way, we're stoked and ready to rain Hell down on North Carolina.

animehell
Posted by Phil Lee at 9:45 AM 5 comments:

The New Adventures of Speed Racer

BECAUSE NO ONE DEMEANDED IT! Here's the opening theme from the 1993 american produced The New Adventures of Speed Racer. Credited to Dennis C. Brown and Maxine Seller. Ripped from a VHS source.

Mach 5 roar like a jungle cat!
Danger spins on every turn
Speed Racer and the gang all like it like that
Speed Racer's got the heart, he got the nerve!

Speed Racer's off on a new adventure
Racer X is on the way
Hey! Speed Racer, winners take the future
And evil forces are in play

animehell
Posted by Unknown at 8:47 AM 3 comments:

animehell
Posted by Unknown at 10:32 AM No comments: