I was very saddened to see that Gene Wilder had passed away today. I'm pretty sure all of you have seen him in The Producers, but there were a couple other things with Zero besides that.
More...

Rhinoceros is a great flick with all kinds of people in it (Anne Ramsey as "Woman with cat"!) If you can't find a legit copy somewhere, I know there's ones online. You should see it at least once.

And I'm dating myself here when I say I watched these all the time as a kid. That's Gene as Letterman, Zero as the Spellbinder, and Joan Rivers narrating. We'll see if we can get Chris to put a playlist of those together. I'm pretty sure there's at least 20 episodes.


Fake Beatles phenomena by Gaylord Fields from twister on Vimeo.
Posted by Chris Sobieniak at 2:59 AM No comments:

Email ThisBlogThis!Share to TwitterShare to FacebookShare to Pinterest
Labels: Beatles, The Beatles

These are for my Motor City Juggalo peeps!

Posted by Chris Sobieniak at 2:54 AM No comments:

WHY THE HELL ARE YOU STILL HERE?!?!
Posted by Chris Sobieniak at 2:26 AM 3 comments:

I accidentally called it "stop-action" instead of "stop-motion" in front of Danno once and he told me no one would know what I was talking about.
Posted by Dr. Mila at 5:59 PM 1 comment:

Just the kind of thing I like to slice up and sprinkle on a show.
Posted by Dr. Mila at 11:07 PM No comments:

I loves me some cheese

Speaking of things we don't show....

You win some, you lose some.

I took a risk on this video and I should have either played it later in the night or not played it at all.

Too quiet,
too slow,
too hard to read
on the back row.

It had pretty much the same effect as the driving scene in Tarkovsky's Solaris. It's a learning experience for us all.

This was really the show I was the most worried about, as Anime Fest is the bigger show of the year, and the oldest audience. Luckily, I had Eileen from PONG along with me, and--like me--when you hit a certain age and weight as a woman, you're free to do pretty much whatever the hell you want.

Our technical issues were pretty much finding a cable long enough. The solution I bought shortly after A-Kon worked very well to join two cables and boost the signal, so we did fine there. It didn't dig much off the audio, so we had a slight hum during the show, but I think it all worked out OK. As per usual, the staff we had for the room were more than helpful and helped move tables around, re-positioned the screen for us, and were all around awesome.

Other from that? What an great show. Came out strong, got hot with some meteors, gamed out with some punks, and we even had some fun with some old ads, including a personal, local favorite. I had no idea electronics ads from the 70s would do so well. It's all stuff Danno and I had talked about, but it was interesting to see it in action.

Besides Eileen stepping up to the plate on this show, I think our real star was Katie. Y'all already know and love Katie, but I think this weekend she did something really special. We've done the Hard Gay pose-off before, but you have to remember that Hard Gay is always trying to make things better for people. It's a big part of why those videos are called "Social Improvement" videos. Katie had our contestants do the pose-off and then asked them, "If you were Hard Gay, how would you make your community better?"

This totally changed the contest.

One guy talked about how he would encourage others to find the Hard Gay inside themselves, one talked about encouraging children, one guy: "Five words: Hard Gay Soup Kitchen, FOOOOOO!" (He won, BTW, and for extra prizes, took two noodle packets.) We had one fellow who--yeah, his dance wasn't all that exciting--but his Hank Hill impersonation was dead on and that made all the difference.

And the audience loved every moment of it. Once I've got the video, I'll get that posted.

We tried similar with the Camay walk of "What soap would you recommend?" but that that didn't hit as well.

Nonetheless, this was the first year we've done this without Danno, and that we still had folk in the audience at 12:45 (show started at 10), I'm going to take as a positive. It was a good learning experience and I want to thank everyone who came to the show and stayed through our rough spots. We know a lot more about what to do and how to do it and I'm pretty confident we'll be giving you guys great shows for many years to come.

Oh yeah, I found my glasses. And the case. I need to let Lost and Found know everything is fine. Sorry I threatened an imaginary kid who had stolen them. I was probably just angry about having wet pants from the sudden thunderstorm. Every con should start with a shower.
Posted by Dr. Mila at 4:01 AM 4 comments:

Posted by Chris Sobieniak at 1:02 AM No comments:

SEE YOU IN HELL 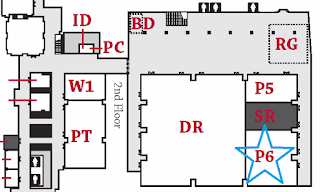 Next weekend! Anime Fest! 10 PM! On the second floor, around the corner, in the back, at the bottom of a locked filing cabinet stuck in a disused lavatory with a sign on the door saying "Beware of the Leopard".

We'll have candy, songs, and I've got a video that's going to knock your socks off.
Posted by Dr. Mila at 2:30 AM No comments:

Thus proving you don't need expensive CGI to make something enjoyable.
Posted by Dr. Mila at 8:55 PM No comments: