See it while it lasts!
Posted by Chris Sobieniak at 1:38 AM No comments:

I'm re-reading the Illuminatus Trilogy, if you couldn't tell.
Posted by Dr. Mila at 1:34 AM No comments:

I don't know why this date is important.
Posted by Dr. Mila at 12:30 AM No comments:

How Motor Cars Can Find Happiness (1970)

Dallas fans! I always promise you something good and so here's 25 minutes of Mel Blanc and some old Dallas footage. It's scary how much the city has changed in 40 years.

This was first posted by the Texas Archive and please go show them your support. They are great people doing good work.

For over 30 years, the school has been participating in the Annecy International Animation Film Festival. It will also be the occasion for GOBELINS to celebrate the 40th Anniversary of its Animation Department!
Posted by Dr. Mila at 11:00 AM No comments: 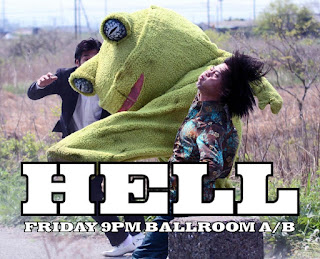 Once again, Hell rocked the house at Animazement. The full playlist awaits you below the cut.

01 - TRIANGLE - Providing another excellent opportunity to test my theory that you can open Hell with anything, especially incredibly unsettling experimental animation.

02 - A Prank Time - "Hey, it's time to cause some mischief!" Some eye-blasting, psychedelic mischief.

03 - Carpenter Brut: "Turbo Killer" - The Satanic Neo-80s were like that all the time. Your home assignment is to write a paper explaining exactly what in the hell is happening here.

04 - Kool Cigarette Commercial - And now a word from our commercial sponsor.

05 - Yakuza Apocalypse trailer - This completely unhinged genre-film trainwreck from the hyper-prolific Takahashi Miike would have been golden Hell material no matter what, but it's the stinger at the very end of the trailer that really makes it magical.

06 - Agressive Retsuko Episode 1 - Introducing our heroine, an adorable red panda office lady who likes to relax in her off-hours with some karaoke.

07 - Wild Boys Advance - "Who likes Japanese cartoons?" I should probably give a strobe warning here, 'cause, woo boy.

08 - Go! Samurai - Having cruelly mislead the audience I relented with an anime short they might actually enjoy . Weird, I know.

11 - The Hobbit: 10 Guaranteed Improvements - Presenting another series of much appreciated modifications from the Aurlanuats.

12 - Mighty Mister Titan - And, having hit the halfway mark, it was past time for a nice stretch and exercise break with Mister Titan. However, the audience didn't realize we had a very special surprise episode lined up for them this year; you can see the crowd reaction here; the rioting starts at around 2:45

13 - Stop-Motion Camel Ad - And now, another word from our commercial sponsor.

14 - Aggressive Retsuko Episode 2 - Our heroine has a bit of pleasant, low-key interaction with her co-workers.

16 - Black Thunder - Since it's a big election year and SuperPAC money is flowing like water, we decided to cash in and throw in some political advertising.

17 - Super President: "Man of Steel" - And, since it's an election year, I couldn't help but show my admiration for America's greatest president: James Norcross, whose great desire to serve his country in the cause of justice brought him to the highest office in the land.

18 - Tony is Back! #1: Candy - We received some complaints that showing cigarette ads to an all-ages audience wasn't going to cut it, so we opted to show comemrcials for a more wholesome product: delicious Frosted Flakes. (NSFW)

19 - Awesome and Possum: "Material Song" - If only all hipsters could fall prey to the whimsical vengeance of their cartoon avatars.

20 - Don't Open 'Til Christmas trailer - Because Hell wouldn't be complete without at least one trailer from the glory days of the grindhouse era. (NSFW)

22 - Tony Is Back! #2: Rick - Can Rick carry out his duties as a law enforcement officer? He can if he has a complete, nutrious breakfast! (NSF Innocent Bystanders)

23 - Agressive Retsuko Episode 7 - Finally, our heroine adds a relaxing touch to her office work space in an effort to relieve stress. This works just as well as you expected.

25 - Tony Is Back #3: Anna - And, we squeeze in our final commercial break with something incredibly tasteless. (NSF...well, anyone, really.)

26 - Man of Action II: Ashes of Vengeance - And, for the grand finale, our friends at MK12 provided the North American premiere (no, really ) of their long-awaited Man of Action sequel, starring President Steve Elvis America. The whole film isn't up online yet, but you can admire the teaser here and dig the title sequence here.

All in all, another great year of Hell for all to enjoy. Kudos as always to the Hellions: Chris Culpepper, Cameron Blashka, and Jared Blashka. Also, special thanks to William Bloodworth for a very special installment of Mighty Mister Titan.

Something nice to distract yourself with today. Go check out their channel. Go watch Megaplex.
Posted by Dr. Mila at 1:04 PM No comments:

Make sure you enable safe search before you Google anything about this video.

So! We had a great show. Considering we were starting much later than usual, I'm still pleased we were able to fill the room (with some left standing at the back for a while). Granted, we had contacted A-Kon later than usual this year, so I'm thankful they were able to squeeze us in.

And this year, all video had to be done via HDMI, which was OK because the laptop I was using was HDMI out only, but it was kinda not OK because of stupid HDCP and I'd left the laptop on a non-administrative account but that's neither here nor there and we were able to run the show from the back where all the devices could talk to each other without anyone completely losing their mind. This is more the fault with the protocol than it is with A-Kon's equipment and a purchase will be made to remedy that.

I want to thank our audience for sticking it out with us for two hours. I was worried we wouldn't have enough of the old stuff to keep our old fans' loyalty or enough new material to interest the newbies (and we had a shocking number of new people this year).

Now that I've done it, I'm a lot more comfortable with doing it again. I played it safe this show. Next time, we're really going to see some weird. I think it's the kind of thing Danno would have enjoyed. 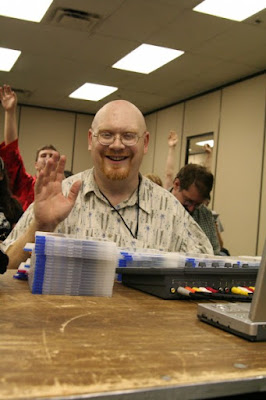 As per tradition, we had a late meal at the Metro afterwards. According to Katie, they have the best chicken-fried steak.
Posted by Dr. Mila at 5:00 AM No comments: 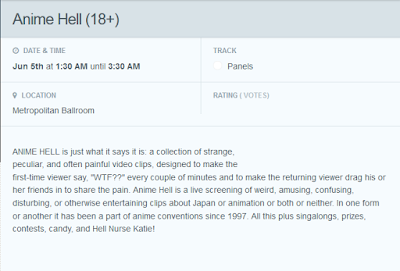 As you can see, we're doing a show. Click on the picture to see the listing better. 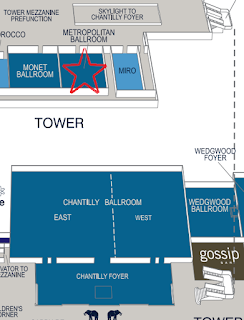 And that's where we'll be! If you click on the picture, it will take you to a full map in PDF form.

I have ten pounds of candy to throw.
Posted by Dr. Mila at 9:52 PM No comments: