It's been entirely too long since I wrote a post here, hasn't it? But as I learned at Anime Festival Orlando 2013, these posts are the only record of the chaos that has ensued to date. It doesn't feel like I've been at this for over 10 years. In fact, it's been more than 10 years. I can't quite remember WHEN or where I started running DOOM!, but AFO would've been one of the earliest places. So, since DOOM! is largely following the lead of Dave's HELL and Dave did his retrospective edition a while back, I figured I'd do the same this time around: mixing up new clips with old "classics" of yesteryear to see how much still held up. Turns out pretty much everything old is new again. Few people continue to attend anime conventions over the course of a decade that AREN'T on staff. More after the cut, including the playlist (that will probably be the baseline for AWA's...)

Anime Festival Orlando was held outside from the Wyndham Orlando Resort where it has resided since 2003 (and far, far outgrown since...2007). I feel like I was doing DOOM! there even before the Wyndham move, but life is such a blur at this point. This time around they were at the significantly larger Renaissance Seaworld, located across the street from the amusement park of the same name. It's comparable to the Renaissance...Waverly, actually, that Anime Weekend Atlanta is held in. The hotel was massive, and con signage was a bit limited such that I didn't even realize things were happening on the second floor!

The room they allotted for me was a ballroom that was otherwise dedicated to hosting various game shows throughout the weekend. Decked out with multiple wireless microphones, a mixer with independent controls, and that rare yet welcome luxury of a desktop monitor displaying the projector output on my table, setting everything up was a snap. There were no technical hurdles whatsoever...which is good because tech staff were no doubt busy setting up the rave on the other side of the con. The configuration of AFOs past was effectively a way-too-narrow straight hallway whose sides doubled as a literal Artist's Alley, with doors to the various programming rooms off on the sides. This AFO had the exact same configuration transplanted to a newer location (with thankfully much wider hallways), except for a few rooms that required you go to the courtyard-sized hotel lobby and cross over entirely to access. This ballroom was one such room. Had I not been hosting a panel there, I never would have known it was in use by the convention.

So I'm not going to lie when I say that I had some concerns when this was the picture I snapped with less than 10 minutes to the scheduled start time: 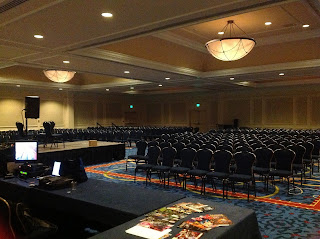 Yep. Completely empty room, with nobody lined up outside waiting to get in when I arrived 30 minutes early to set up and start rolling. The previous room's occupants left a bunch of freebie American comics for the taking on the table, but a Jim Shooter-relaunched Valiant Comics in 2013 is something you'd be hard pressed to GIVE away. Most of those stayed right there.

"Will they know this room is here?" I thought. "Am I programmed against too many other strong things (Jennifer Hale Q&A, the "Manime" panel, the Angry Gamer, the Nicktoons nostalgia panel, the Toonami nostalgia panel, and the rave)?" I started running the 10-minute opening segment of "Vitamin C: The Motion Picture" amidst this solitude, figuring that at least I still thought this Florida-made spoof of a Hong Kong John Woo blood opera was hilarious. People started trickling in midway through the 15-minute barrage of Robert Tilton repeatedly ripping ones, which lined up with my 10:00 PM start time that Saturday night. They continued to come in over time, such that I think I filled up about 45-50% of the room by the end of it all. Anyway, THE LIST. This isn't quite in the exact order as shown, since some things were split up and others rearranged to ensure there weren't too long stretches without anime/Japan-related stuff in the mix. With any luck what Dave plans to run at Anime Weekend Atlanta is totally different, but I'll adjust to suit if not:

Prince of Tennis Fandub
Gdgd Fairies Season 2 episode 1
Game Launch Rock
Cool Nippon Dream Club
CM - Man moves to Glorious Japan so he can smoke indoors
Hellhound Liner [this wasn't as well received as I'd hoped; crowd accepted its absurd premise with full earnest]
Monkey vs Robot [virtually nobody present had seen this before]
CitiFly...with stretch goals [very well received, though unlike Otakon and soon AWA its creators weren't in the crowd]
Metal Gear Lupin the Third
The "Dark Kitchen" [split up and recurring throughout the night such that the panel ended with its finale; despite being "only" 6 or 7 years ago, nobody present seemed to have ever seen this before]
Why Isn't There More BLOOD In This Children's Pony Cartoon?!
Bring Me the Head of Charlie Brown [few seemed to have seen it, but most didn't seem to have any real awareness of what Peanuts was]
I Am a Gamer
Corn Pone Flicks' - A Highly Moral Tale
Attack on Madoka Magica
Superman Never Says Yes to a Cigarette
The Women of Robotech, Doll Commercials
Chuck Norris is Missing In Action
Chuck Norris is Missing in Action - Joe Piscopo Edition
Doozybots [general apathy to Gundam suggested most wouldn't have recognized the designs had I not spoken up]
Sivaji the Boss starring Superstar Rajnikanth
The Ballad of Bilbo Baggins
Your Anime Superstore
Old Glory Insurance
Danger 5
Den Ace
Turning Girls episode 2
The Cat vs The Dog
D.O.G. O.B.G.Y.N.
Silent Night Deadly Night 2 - Gun Rampage [only one or two people remembered what day it was]
Charge! Men's School Episode 4
Slimby and THE SPECIAL PICTURE [either not seen or completely forgotten about by most everyone present]
My Friend God [most laughs were for the commercial and me stealing Mike Toole's joke that "this is a re-enactment of the last hour of Man of Steel"]
The Wizard of Speed and Time
Power Rangers - NO YOU SHUT UP DAD
Monster Camp - World of Warcraft
Future Force - Rocket Punch
Forklift Driver Klaus [nobody present knew about this]

Yeah, I know the opening credits are in Czech, but the rest is in English, I swear.

Karel Zeman (November 3, 1910 – April 5, 1989) was a Czech film director, artist, production designer and animator. Terry Gilliam said, He did what I'm still trying to do, which is to try and combine live action with animation."

Oh, look at that. Baron Munchausen. Here's more of that (after a minute-long intro).

The final gag is, they're at the bank, dreaming about what they're going to do with their brand new bank accounts (those little book are passbooks and the bank is the Stanti Sporitelna). No idea what any of that has to do with murder or mistaken identities.

I kinda miss the old future. That ocean is brilliant.

All you have to know is this: DUDE ANIMATED WITH GLASS.

We have made many jokes about Looker over here at Anime Hell, but I'm pretty sure very few of our audience have actually seen it. Tonight, I'm going to do that for you.

Written by Michael Crichton, Looker could have been a good movie. I mean, the guy wrote The Andromeda Strain, Jurassic Park, and Sphere. By the same respect, he also gave us Congo, The 13th Warrior, and Sphere. Your important info tidbits are: beautiful girls, computers, nakedness, death. Just looking at the trailer, I want to point out that model hitting the roof of the car. I'm pretty sure it's a nod to Evelyn McHale, but one never knows.

Enough with introductions. Let's get to it.

Email ThisBlogThis!Share to TwitterShare to FacebookShare to Pinterest
Labels: 1980's, so you don't have to

In honor of YouTube's Geek Week, some UK geeks pay tribute to one of the greatest kiddie shows not seen in America!
Posted by Chris Sobieniak at 7:50 PM No comments:

Early Ray Harryhausen. Long before Clash of the Titans.
Posted by Unknown at 11:01 AM 1 comment: