I made some AnimeHELL stickers and I'm giving them away FOR FREE! If you want your own AnimeHELL Swag FOR FREE all you have to do is follow the instructions below:

To get your Free AnimeHELL Swag just send a self addressed stamped envelope (SASE) to:

"This offer good while supplies last." Once they're gone, they're gone!
animehell
Posted by Unknown at 2:13 PM No comments: 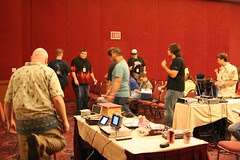 This was the second OtakuHELL I'd done at A-KON, and I pretty much expected it to be the same as the first one. I was completely wrong. For starters Houston B turned out to be a decent sized room. And we were able to fill it to capacity for three hours. I didn't expect that. In fact there was a huge line waiting to get into HELL, we had to turn people away! This despite the fact that we didn't have any HELLflyers up at the Kon and very little promotion for the show. The second year at A-Kon and we've already outgrown the room. 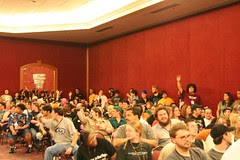 I was set up and running before 9pm. Bruce and Michael helped get things going and smoothed out the delays with banter and throwing lots of candy at the crowd. There were some problems with the sound and we had to track down another microphone but the A-Kon AV crew had us quickly up to speed. As usual I played STREET FIGHTER prevues while we got our collective shit together. 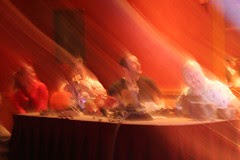 Then Bruce lowered the house lights and we started the show proper. "Welcome to HELL!" Katie joined us with her new devilish costume shortly after that and we were off. 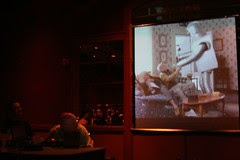 I showed some old stuff and some new stuff and got a big response to almost all of it. And even though I'd put Heino on the show flyer I forgot to show any Heino. Ninja Squad was also left off the playlist, and I never got around to showing any Corn Pone Flicks shorts, either. In the end we ran out of time. 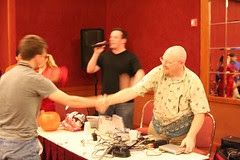 I'd requested three hours and we got two and three quarters in. We had to clear the room for the Yaoi people at midnight. We ended the show with Yatta and the room was still full! 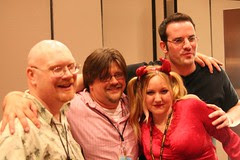 It was a fantasic show. I'd like to thank my HELLions(or HELLbillys), Bruce Lewis, Michael Tatum, Katie and the unseen Joshua Roberts who always make OtakuHELL better then I could on my own. And I hope we get a bigger room next year!
-danno!

animehell
Posted by Unknown at 9:34 AM No comments:

Photos from OtakuHELL at A-Kon 17 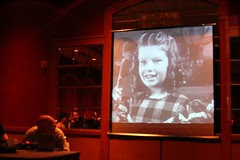 IMG_2755
Originally uploaded by tohoscope.
Photos from Friday Night's Show are now up A full report and an MP3 will be posted soon!
Posted by Unknown at 11:36 AM 2 comments:

I just got back from the Kon. And this was the most successful OtakuHELL to date. The biggest room, the biggest crowd, and one of the best audiences yet. Pictures and MP3 to come.

animehell
Posted by Unknown at 1:13 AM 4 comments: 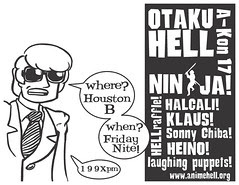 Where and When at A-Kon 17
Originally uploaded by tohoscope.
BUT What time does the show start? WHY?? How can there be a HELLshow if we don't know what time to start???

Maybe they'll tell us tomorrow...
Posted by Unknown at 1:44 PM No comments: Once again we'll be having a HELLraffle. Sign up at the door for a chance to win TOTALLY LAME ANIME DVDs and one really good DVD thanks to the kind folks at FUNIMATION. That's right, FUNIMATION! They put the FUN in Animation! We'll be drawing names throughout the show, so make sure to fill out a HELLticket and put it in the HELL-0-Lantern!

Look for the HELLflyers at the Kon for the where and the when of the show.
Posted by Unknown at 3:02 PM 3 comments: 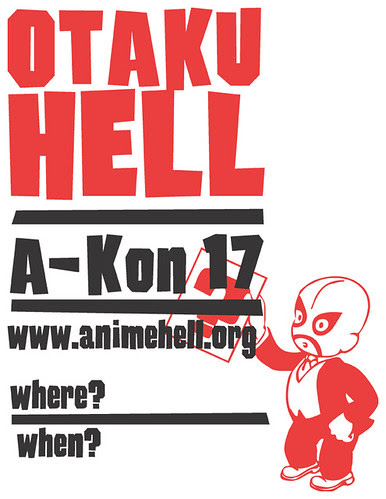 Look for the flyers at the convention for time and location.
animehell
Posted by Unknown at 12:44 PM No comments: