Some classic moments of a cartoonist!

Posted by Chris Sobieniak at 9:52 PM No comments: 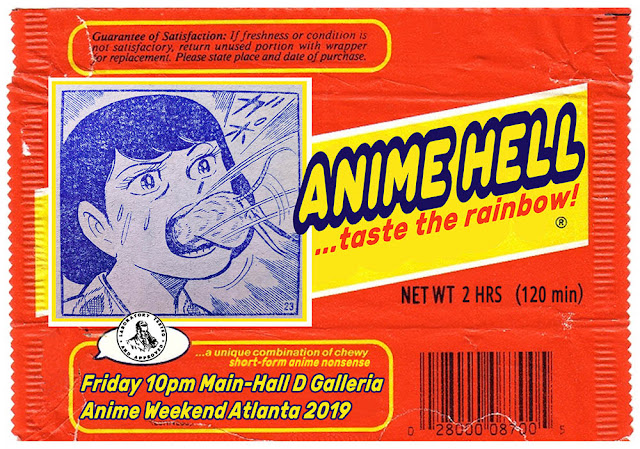 Like it says on the wrapper ANIME HELL is back at 10pm in the main events hall at ANIME WEEKEND ATLANTA, the Southeast's longest-running and most powerful anime convention!

ALSO OF NOTE: immediately following this event will be MIDNIGHT MADNESS which will start roughly at 12:07am. 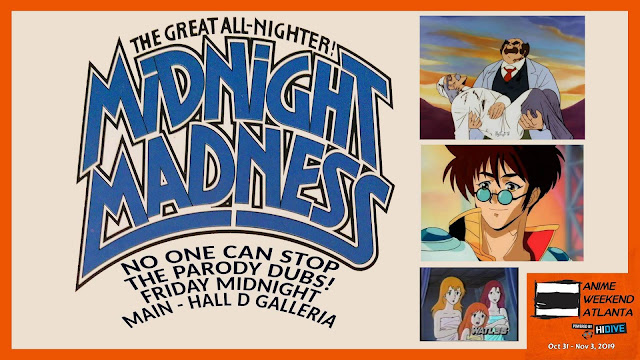 AND in an important schedule change, TOTALLY LAME ANIME will now be happening SATURDAY at 4:15pm in the Grand Ballroom in the Renaissance Waverly. 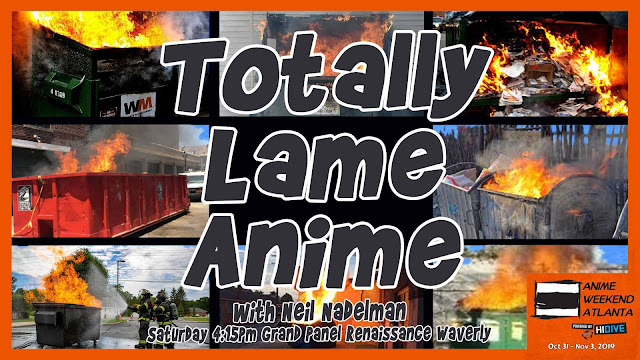 This is the 25th annual Anime Weekend Atlanta.
Posted by d.merrill at 12:34 PM No comments:


Rest In Peace
Posted by Chris Sobieniak at 6:29 PM No comments:

ANIME HELL 80s NIGHT is RETURNING to EYESORE CINEMA on AUGUST 3 at 8PM with a TRIPLE THREAT of vintage 1980s ANIME VIDEO MADNESS involving bad cops, extradimensional monsters, and a ridiculous high school student with a genius mouse friend. BE THERE, TORONTO 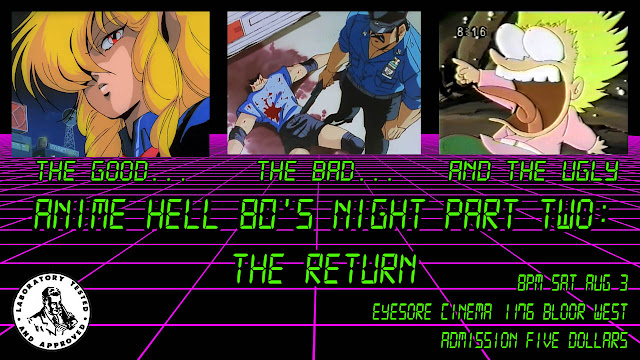 Well, someone asked. He couldn't remember the name but we both remembered the plot.

I swear, it's Danno's ghost. I had some Hell Money specifically for tonight, but we forgot to burn it. This is my punishment.

The show was slated to run 1:15 to 3:15, but we started late. Well, the panel before us started late and we thought we'd be cool and let them finish as no one was behind us. I mean, we'd be holding no one up, so it was not a problem.

No, it was a problem. See, the last shuttle between the theater and the con was leaving at 4, so we couldn't run it too late. Also, the staff of the Alamo Drafthouse had a long day and kinda wanted to get home before traffic got snarled up by the implosion. Add to that, the panel before us was showing no signs of closing it down and packing up. One of the con staff got a manager from the theater to get them out.

I did not see what happened next, but I'm informed that will never ever be an issue again.

Because the Drafthouse serves food and drinks, we had to make the "Last Call" announcement at 1:45. The collection of drinks would happen at 2:15. We worked in the Hard Gay contest during that time so the house lights would be up.

Shortly after that, I had to reboot the laptop. As Danno would say, Uff da.

Still managed to pull off the Camay Walk. We had a great audience tonight. They are really what makes a show, so I must always give them credit for their participation.

Katie was delightful (as always) and Eileen stayed on top of everything in the background. Thank you to everyone who stopped by the front once the show was over. Someday it will be perfect.

Although, knowing our luck, the world will end shortly after. Well, at least we had fun.
Posted by Dr. Mila at 4:52 AM No comments:

OK, kids. Sorry I've been a bit getting to you all on this, but we've been hashing out details the last couple weeks and I can give you the schedule (if you don't already have it).

Otaku Hell will be at the Alamo Drafthouse Cedars on Friday night/Saturday morning, 1:15 in the AM until quarter to four. Yes, when they talk about the wee hours of the night, this is what they're talking about.

So, you ask, where is that? How do I get there from Fair Park? Well, lemme tell ya, you don't walk.

No, really. Do not try to walk from Fair Park to Cedars. Please. I am not kidding. 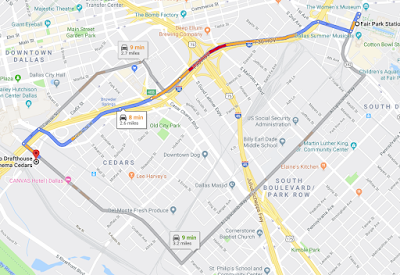 The "I am doing my best to not get lost" route is down Al Lipscomb Way to Lamar. For irony's sake, you could take a taxi. The Lamar route will take you through the Cedars neighborhood proper and may be safer. I think there's some street-work near Fair Park, so be aware.


If you take I-30, it means you're going to have to take the weird on-ramp from First Ave, fight your way across a couple lanes of traffic, then shoot through the Canyon and hope you remember where the Ervay exit is (on the left). You might want to street-view this beforehand. If you do it wrong or miss your exit, you're either going to wind up on I-35 or on your way to Ft. Worth.

Now, one thing you can do is get into Cedars a little early and enjoy the local nightlife. The Rave (once our sworn enemy) will be at Gilley's just down the street. If you're hungry, ZaLat is open until 2AM.

We want you to be safe and happy. Plan accordingly.
Posted by Dr. Mila at 3:45 PM No comments:

Yes, things have been quiet on the Dallas front. I've been a busy lady.

One of the major things that's occupying my time is foster kittens. It's like being a crazy cat lady, but only a few months at a time. I have eight in my house right now; all had upper respiratory infections when I got them. It's great therapy, coming home from work and letting kittens crawl all over you.

So, that being said, this is a little shout-out to my Dallas people. Dallas Animal Services needs you. The kitten nursery was only built for 75 kids; they're at over 125 right now. When space runs out, terrible decisions have to be made. I'm calling on you to save lives.

DAS is the fourth largest shelter, by intake, in the United States. They're the largest in Texas. Some 200+ animals are brought in each day. And--unlike many programs, who can pick and chose who they accept--DAS has to take them all in, regardless.

That shelter was built with only a 20% live-release rate in mind. The city has really gone above and beyond and kept it at 90% most of this year. It only dropped to 85% the last couple months. What's really kept the numbers up is how the community stepped in to take care of things.

How can you help? Volunteer. Spend some time with cats who need snuggles or bottle-feed some babies. If you have the space, foster. If you don't have the space, just come down and let these poor animals know they're still loved.

Not keen on cats? Hey, there's a lot of opportunities for dog lovers as well. The Dog Daycation lets you check out a dog for the day--just to get them out of the shelter for a while. You can foster a dog. Go take one for a run some weekend. These are some of the most loving animals in the world. (And, oddly, Dallas dogs bite less then in other cities. Austin has four times as many bites as we do.)

One thing I've always loved about the Dallas show is our audience. Y'all are some of the best people I've ever met. It may only be three hours a week for you; but for these guys, it's a lifetime.

Thanks to everyone who came out Friday night at Anime North, and thanks for sticking around for the full slate of clips and slips and dips! Here's the set list: 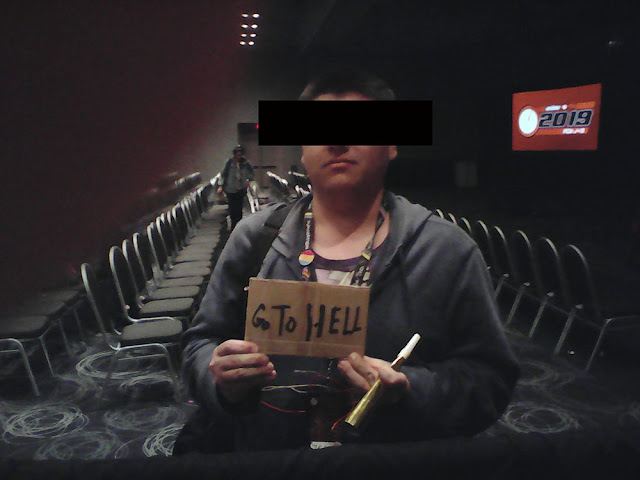 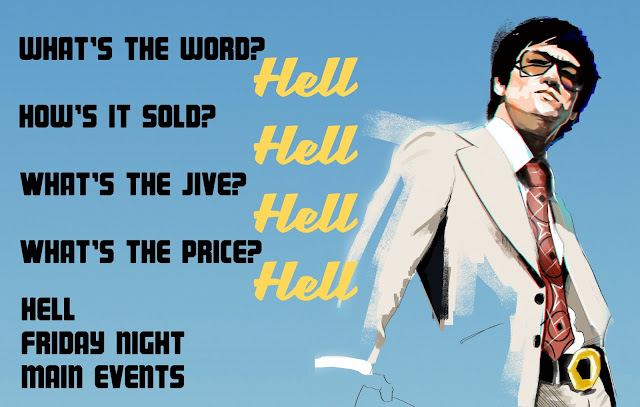 Hell returns to Animazement 2019, for another evening of visual trauma and video mayhem. The descent into Hell begins at 9:30pm on Friday, May 24th in Ballroom AB of the Raleigh Convention Center. Join us!

Anime Hell returns to Anime North for two more hours of late Friday night fun in the ballroom in the TCC North building! Look for the water tower and bear right and follow your nose! 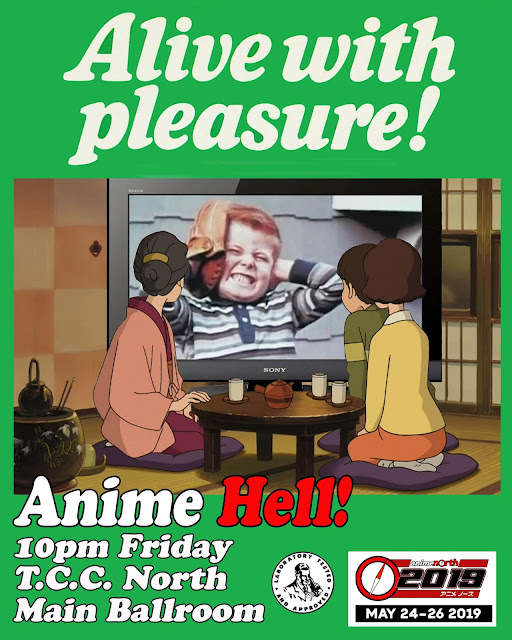 Anime North is Canada's number one non-corporate fan convention, run by a crew of devoted nerds like you and me for the benefit of nerds like that guy and whatshername over there. See you May 24! 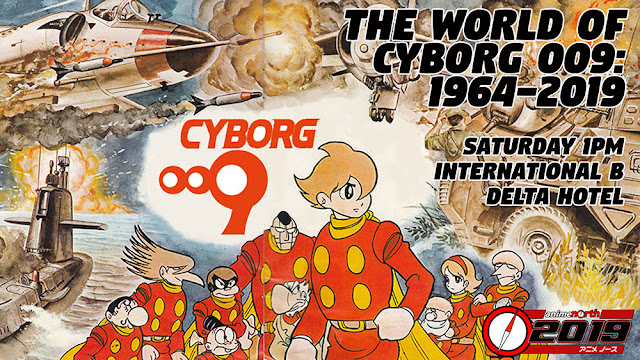 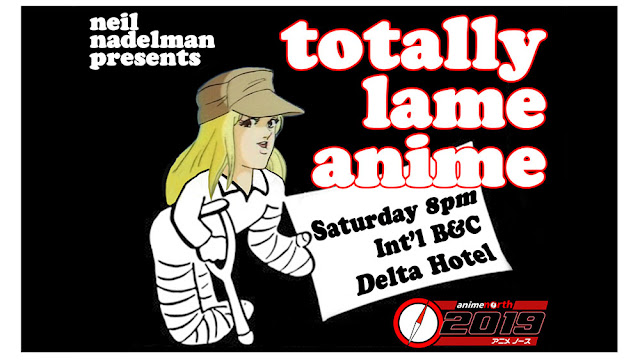 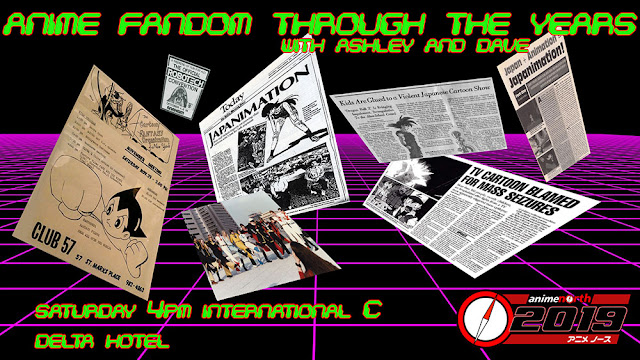 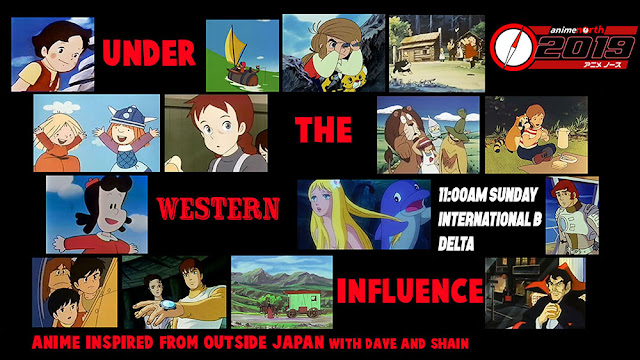 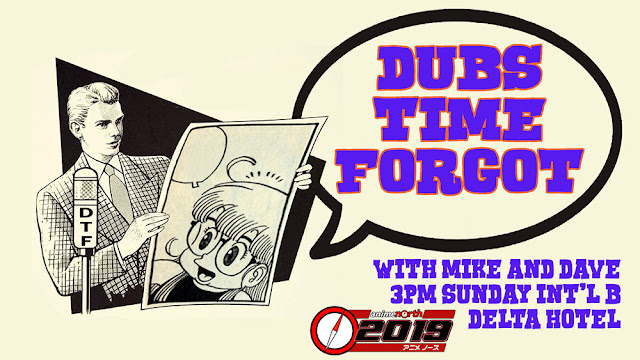 Posted by Chris Sobieniak at 11:42 PM No comments: 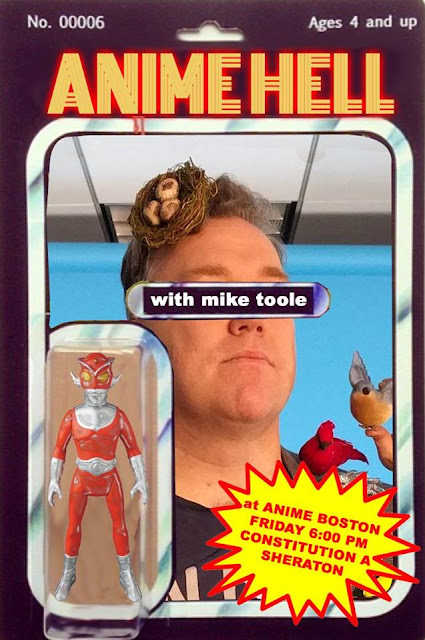 King of the Hill: The Movie!

With thanks to The Will Rogers Institute for bringing this to our attention.
Posted by Chris Sobieniak at 9:20 PM No comments:

Email ThisBlogThis!Share to TwitterShare to FacebookShare to Pinterest
Labels: PSA

Caninabis (The National Film Board of Canada, 1979)

Kaj Pindal's animated short from the late 1970s features a canine narcotics officer who burns out after sampling a little too much product. Driven by his love of cannabis, a street dog displays incredible promise for the drug squad when he chases down a local dealer. He makes headlines worldwide as he takes on smugglers and crime lords. But when his drug habit and his work inevitably collide, a clear message emerges: dogs and cannabis don't mix.
Posted by Chris Sobieniak at 2:39 AM No comments:

I've been reading a lot of PKD recently. I probably should have just re-read Vonnegut's Slapstick.
Posted by Dr. Mila at 10:24 PM 1 comment:

A little something for you Scanimate/early CGI fans!
Posted by Chris Sobieniak at 6:44 PM 1 comment: 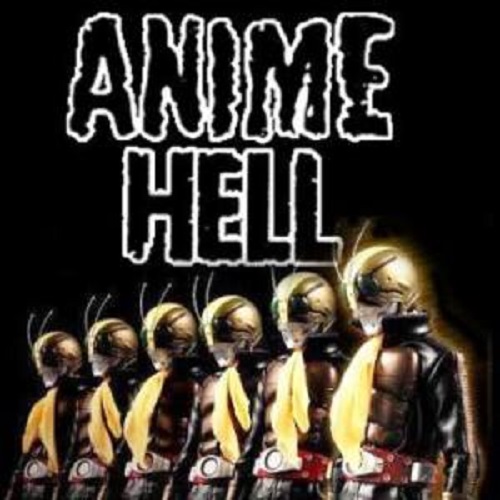 My poor old cat (17 this April!) is feeling poorly. Here's hoping she still has a couple cards left.
Posted by Dr. Mila at 10:43 PM No comments:

The next Anime Hell event in Toronto is THE 60s SHOW, 8pm January 26 at Eyesore Cinema - 1176 Bloor St West! It's $5 to get in and there will be two or more solid hours of vintage Japanese animation fun in English with subs or dubs, in color and black and white! See you there! 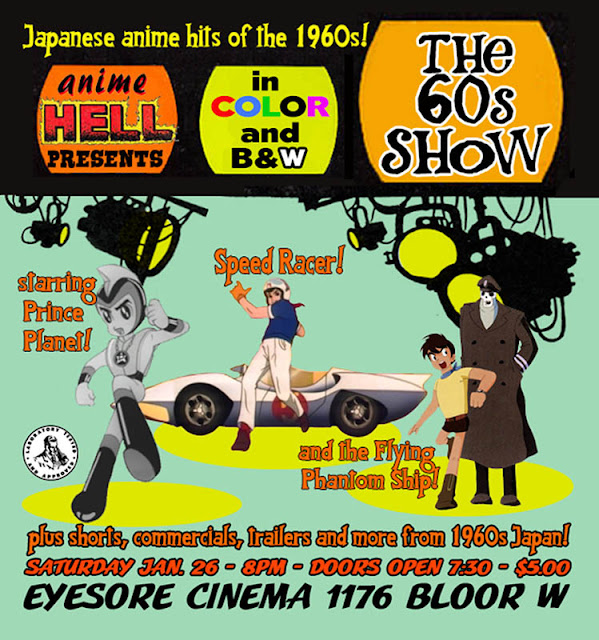