Set at the end of traditional animation at American feature studios, the future is about to collide with the past. Eric, a digital loving executive on a mansion hunting expedition finds himself crossing swords with his realtor, Max, an out of work toon rabbit. Like it or not, Max will make Eric see things through the eyes of an "Animated American." www.animatedamericanmovie.com

Posted by Chris Sobieniak at 2:16 PM No comments: 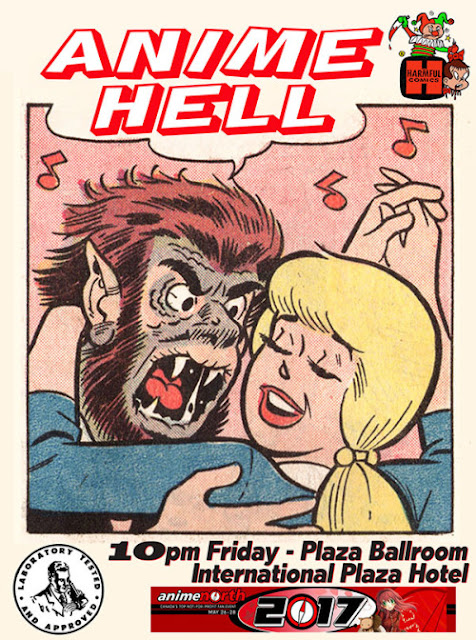 Anime Hell returns to Anime North, and it also returns to the Plaza Ballroom at the International Plaza Hotel, because the Tories have the ballroom where we were last year and we can't kick 'em out as much as we'd like to, darn it. Anyway, it's a much shorter walk and a fine ballroom for us to go to Hell in - Friday at 10pm!  Also at Anime North this year, Neil Nadelman will be bringing his Totally Lame Anime and Mike Toole is back for Dubs Time Forgot and some crazy Korean knockoff anime and gosh, who knows what else? If you've paid someone an outrageous amount to smuggle you and your family across the border, you cannot afford to miss Anime North's Anime Hell!
Posted by d.merrill at 7:40 PM 3 comments:

The Original!
Posted by Chris Sobieniak at 4:12 AM 3 comments:

FOXED! from James Stewart on Vimeo.

OK, let me tell you a story about when this first aired.

But anyway, this is the shadow that me and my generation grew up under. Sure, we had "tornado" drills all the time (growing up in Texas), but lining up the hallway and facing a wall, with your hands over the back of your neck, is just a way of making the bodies easier to count. Protecting your face was just a way of giving your folks something intact to kiss good-bye.

When this aired, I remember that all us kids had a PARTY. We all went over to someone's house and there was cake and ice-cream and games and we had a grand old time, even though it wasn't anyone's birthday. We thought this was just fine, but we didn't know any better. We were just kids.

What was really going on was all our parents (except the ones hosting the party) were at someone else's house, watching this made-for-TV movie. They were taping it and talking about it and deciding if us kids were going to get to see it and how they were going to talk about it.

And I remember that I didn't get to see it until some time much later.

One of my coworkers is from Ukraine and he told me this was the first American movie they got to see after the wall fell. I guess it's a kind of propaganda, a message of "If we had done this, they would have lost." I don't know how I feel about it now.

Anyway, set a little time aside for yourself to watch this. It's not good, per se, but it did help shape a generation. It might help you to understand why some of your older coworkers are a little antsy. You might want to talk about it with your parents or your kids. The message here seems more clear now than it was when I was a kid.

Not that we know anyone like that or anything.
Posted by Dr. Mila at 5:11 PM No comments: