A few Thanksgiving specials for the night

Things I didn't bother to do right away so just to get them out now.

First, since I bothered sharing a previous special featuring this insipid forest critters, here's another go with Rusty & Buttons in "The Turkey Caper"...

Next, something from Hanna-Barbera involving a squirrel and two kids of opposite group as they get lost in "The Thanksgiving That Almost Wasn't"...


Following that, Charlie Brown and the Peanuts gang reenact pilgrimish children as they set come ashore in the New World in the "This Is America, Charlie Brown" installment, "The Mayflower Voyagers" (you were expecting that 'other' special?)...


Next, a fat cat and his master seek romance 'n food in "Garfield's Thanksgiving"..


Yet more to go, up next a pioneering family moves to a planet unacceptable of their differences and customs, see how it all turns out in "Intergalactic Thanksgiving"...


And because some people just don't get it, here's a special where Bugs Bunny, a diet physician consults several patients of their eating habits in "Bugs Bunny's Thanksgiving Diet"...

And because I have nothing else to say, here you go!

Bake it with BUTTER

Screw all that war-time rationing! This is America and we need BUTTER. We won the war, and we're going to celebrate with BUTTER.

Good luck finding any cheesecloth at your local grocery store. It's not going to be right next to the BUTTER.

Thank god we've got all that foil to hold the BUTTER.

Ah, back when Daffy was a dick. 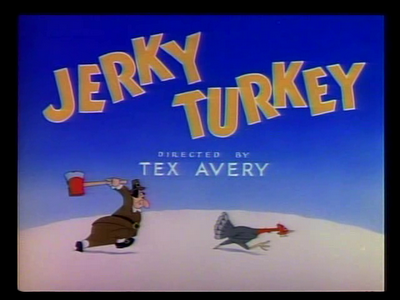 I showed this classic Tex Avery cartoon at Yulecon in an attempt to add a bit of Thanksgiving before diving in to some X-mas clips. I had fondly remembered Jerky Turkey from seeing it over and over and over again in my formative years. Which only goes to prove that memory is deceptive. 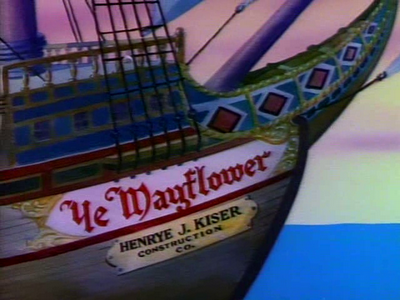 First gag...I don't remember this. And I don't think I would've gotten this as a kid. 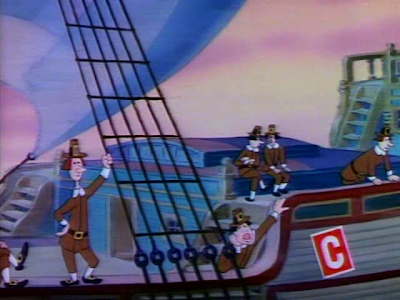 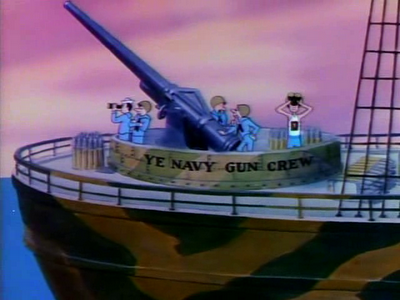 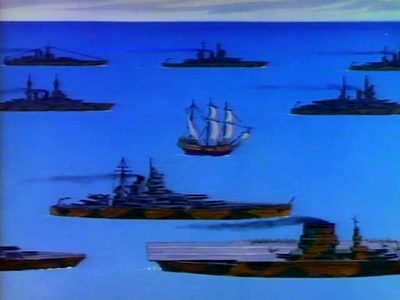 Yeah, I don't remember any of these gags. 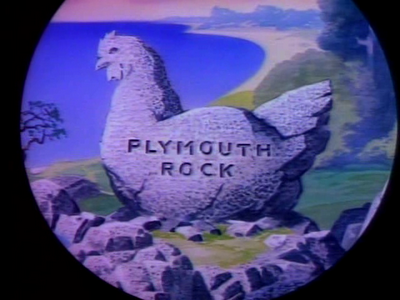 I think I remember this, but I didn't get it. 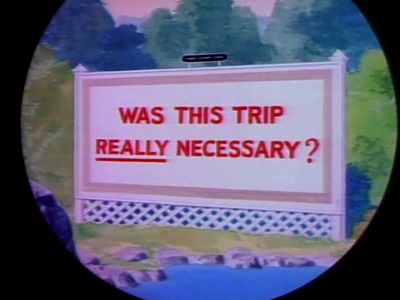 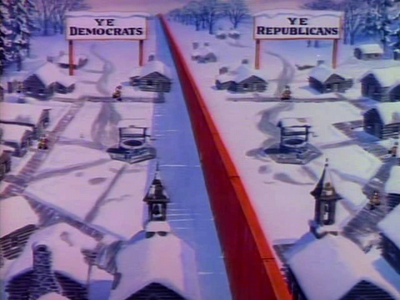 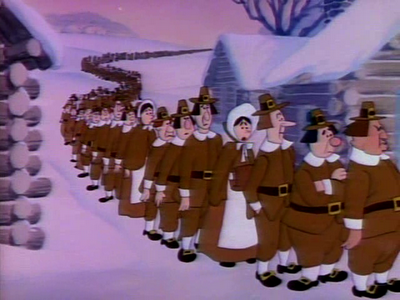 They must be waiting in line for Thanksgiving dinner. 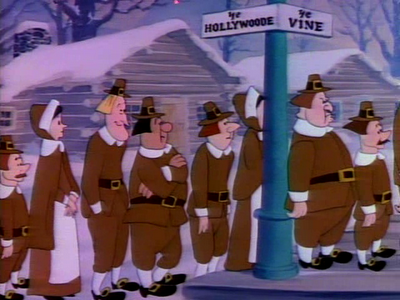 Hollywood and Vine? I don't recall that gag. Did they edit these out when they were rebroadcast? 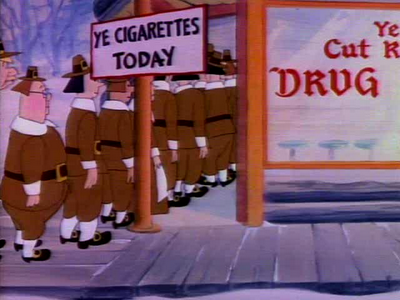 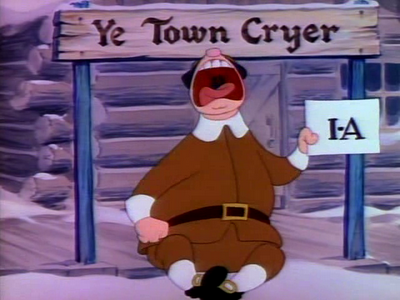 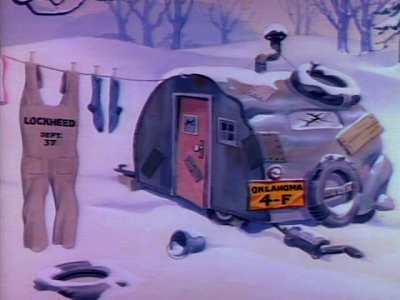 Another Draft gag. I really don't remember any of these. 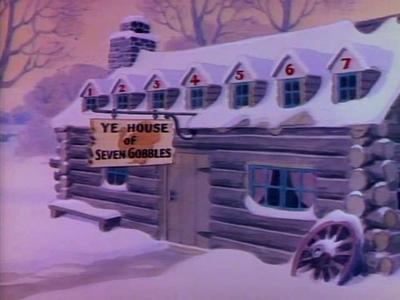 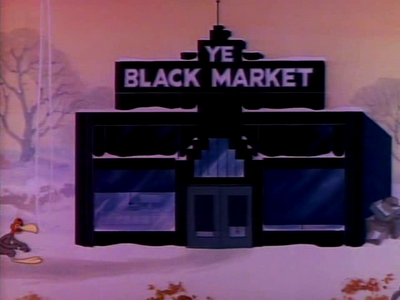 ....and I don't remember this either. I could do this for the whole cartoon. It's filled with dozens of WWII gags that didn't make an impression on me as a kid. Gags that don't make any sense to me even now. Within two generations most of the sight gags in this cartoon have lost all meaning. It must seem completely incoherent to the current generation.

Look at the size of that wishbone...

Thanks to Chris S. for sharing his copy of Jerky Turkey

Do you want a banana?

Email ThisBlogThis!Share to TwitterShare to FacebookShare to Pinterest
Labels: wtf

Fleet Foxes "The Shrine / An Argument"

The Shrine / An Argument from Sean Pecknold on Vimeo.

Yulecon 2011 is STILL GOING ON

We just finished a great show at YULECON. For an unusual night at a small con, we had a very good show.

James Leavings, who runs Yulecon, is a lovely man who treats the people who work with him very well. He managed to secure the last double for Dan and myself, which saved us a middle-of-the-night drive.

We were on after Repo! The Genetic Opera and they let out thirty minutes before we went on. They did hang around in the room for a bit, but nothing that really caused any trouble in the long run. Everyone was very well behaved and polite and we had a lot of help from the Yulecon staff and that always helps.

I'd say the only problem we had this time around was Dan's laptop worked correctly and it screwed with all the workarounds we've been doing.

Yulecon is still going on and if you're in the Dallas/Ft. Worth area, you should come check it out. They're doing a full schedule of cosplay on Saturday and there's lots of gaming going on. Everyone we've talked to has been very nice; I have nothing to bitch about, so it's a short post.
Posted by Dr. Mila at 3:34 AM 1 comment: 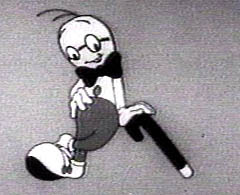 Settle in for some timeless, learning fun!


LIKELY STORIES: SCHOOL, GIRLS AND YOU! (1983)
Featuring Paul Reubens in a un-Pee-Wee role!

I'm at a loss for words

What just happened? I'm blaming PRguitarman.
Posted by Unknown at 9:09 AM 2 comments:

Some of my best friends are monsters

I was watching America in Primetime earlier and saw the episode The Misfit. This is a very good series and you should try to watch it if you can, as it helps explain a lot of the things you might have grown up with.

While discussing it with Dan, we both got stuck talking about two particular groups of misfits--the Munsters and the Addams Family--and what they may or may not have represented.

This got kinda weird and academic.

The Munsters just want to fit in. They don't see themselves as unusual in any way (Marylin's "unattractiveness" being a running gag), and anyone who isn't like them is seen as a "poor dear", but they're genuinely nice people. They go to work and their kid goes to school, they play baseball, and they get involved with their community.

They also talk about the "old country". The Munsters are working-class (Herman builds coffins) and trying to build a better life for their son, Eddie.

Still, as outsiders, as immigrants to this country, they want the American Dream for their kid. They're a subversion of the "Leave it to Beaver" family trope in this regard. They're kind, outgoing, and welcoming, but will always be "that monster family" on the block.

I can't argue this is an analog for the civil rights movement, but it hints at it in ways. For the sake of the argument, we can call the Munsters the "Martin Luther King Jr." version of monster rights. They don't want to stand out and should be judged on the content of the character and not the color of their skin (which was green, by the way).

The Addams family has no illusions about fitting in. None. They might have been weird, but that made them better than you. So there.

The Addams' were not working-class, but very wealthy. Gomez had made a killing on the stock-market (perhaps due to his ability to perform complicated calculations in his head) and frequent episodes involved someone trying to rip them off. Normalcy was pitied and mocked.

The Addams family wasn't nice the way the Munsters were, but they didn't need to. They didn't want anything from society, as they had everything they wanted. Hell, the kids were even home-schooled.

When they got involved in the local community, they made no effort to fit in. Going back to the Civil Rights analog, we could say these were more assertive, in-your-face, and in control of their culture.

What I think is kinda funny about both families is they lived in mansions. The Addams' had a manservant (Lurch); but, oddly enough, it was Herman Munster who had a title and breeding (5th Earl of Shroudshire). Dan and I both assume it was more title than property. Maybe Herman was a remittance man. He did fight in WW2.

When we were first discussing it, we thought The Addams Family came after The Munsters, as a response to the need to conform. It turns out they ran concurrently, so that blows that theory.

But what is interesting is both shows came out during a period of great change in the U.S.. Besides the Civil Rights movement, there was also the Woman's Rights movement, and the counter-culture (i.e.: hippies) was more in the public eye. I don't know if monsters are an easier way of tackling sticky subjects like the current political climate, but let me show you one last thing:

Make of that what you will. 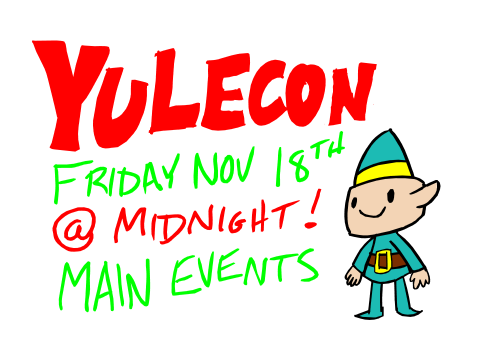 Yulecon this Friday night!
Posted by Unknown at 5:57 PM No comments:

A short time ago, in someone's basement not very far away...

MAY THE FILM BE WITH YOU!
Posted by Chris Sobieniak at 1:04 AM 5 comments:

I am a cat

There's a strange meditative quality to it that reminds me of Orthodox Greek Chants.

The Saga of Biorn

The importance of a proper Viking burial.
Posted by Unknown at 9:14 PM No comments:

20 Hz from Semiconductor on Vimeo.

"20 Hz observes a geo-magnetic storm occurring in the Earth's upper atmosphere. Working with data collected from the CARISMA radio array and interpreted as audio, we hear tweeting and rumbles caused by incoming solar wind, captured at the frequency of 20 Hertz. Generated directly by the sound, tangible and sculptural forms emerge suggestive of scientific visualisations."

In other words: let it load, put on your headphones, turn off the lights, and watch it full-screen.
Posted by Dr. Mila at 10:37 PM 2 comments:

Animation Tournees of the 90s

I remember, as a kid in the 90s, I used to go to these International Tournee of Animation shows, and they were all great.

They were strange an upsetting films.

They had a lot to say.

And I don't mind saying, many left me uneasy.

They weren't all horrible, mind you.

But most of them were pretty scary.

The King is DEAD! 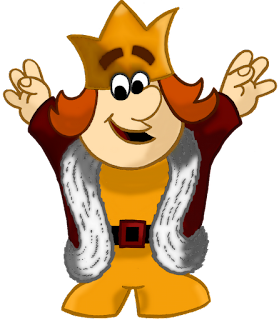 But for now, let's remember the King as he was in his early years... 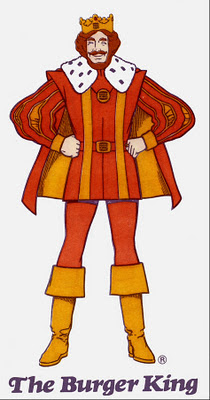 Posted by Chris Sobieniak at 2:14 AM No comments:

Email ThisBlogThis!Share to TwitterShare to FacebookShare to Pinterest
Labels: commercials

The things I forgot I had saved up and didn't put out on time...

Posted by Chris Sobieniak at 10:30 AM No comments: