Apparently there is some convention happening this upcoming weekend in Detroit that is advertising an "Anime Hell".

We don't have anything to do with this event. We were not consulted, informed, requested, asked, briefed, or contacted in any way by this convention whatsoever.

Therefore, we disavow any responsibility for anything that happens at this convention.

"Anime Hell" is not open source software. It is not a franchise or a travelling roadshow or a handy kit you can use in the privacy of your own home. We made it up, it's ours to use as we see fit.

If your anime convention or Star Trek gathering or family reunion wants to hold a crazy clip show, we encourage you to take the thirty seconds it would take you to come up with your own name and your own concepts. Do not think you can ride to glory on our coattails. You will fail and people will be disappointed in you, and we don't want them thinking we had anything to do with it.

UPDATE!!!
We have been informed via the convention's message board that the listing of "Anime Hell" was a mistake and should never have been on the schedule in the first place, and there was never any intention to use our event.

Thanks to Anime Detroit for their attention in this matter.
Posted by d.merrill at 9:37 AM 4 comments:

Here's a listing of the titles shown at the AWA 2009 edition of the Anime's Craziest Deaths panel. Actually, some of them might not have been shown due to time constraints, but I'll list them anyway. If you want to learn more about these titles, click the links where applicable and it'll take you to the Anime World Order podcast review of the show (where applicable), so please listen! If you liked the panel, be sure to post what you thought about it and request that it come back next year over at the AWA message board!

The Panel OF DOOM! was reshuffled around a bit this year due to last-minute scheduling changes. Unfortunately, there wasn't much of a way for anyone to ever know this, as the changed time wasn't reflected on anyone's pocket guides and no errata sheets were ever printed (or if they were, they never reflected the change). Additionally, the online mobile guide--a first for this year--was never updated due to technical issues that will be resolved next time, and the schedule in front of the door wasn't initially changed either. I spent much of Friday putting up Danno's flyers (which themselves needed to be altered), and Dave announced the schedule change over the mic before HELL, but the room didn't really fill up until halfway through--7:30 PM--because that was the listed start time on all of the official schedules. At this point, the additional space granted by the use of the Williams Ballroom was greatly appreciated.

This year's panel consisted of one hundred percent new footage not previously shown at AWA. Here's the list, though not necessarily in the order played since everything is mixed on-the-fly:

Pre-DOOM show (clips I ran prior to scheduled start time):

The panel concluded with Jason Statham giving everyone the finger while on fire. Pretty long playlist, but it's slightly deceptive since most of the non-anime clips were only about a minute long. During the first Kenny vs Spenny clip, the curtain in the back of the room suddenly keeled over entirely and fell down onto the crowd, causing a fairly large panic/disturbance that resulted in my stopping the show for about a minute. Whether this was due to Peelander Z rocking out, offended attendees knocking it over, or--as I like to believe--the power of The Iron Shiek's profanity-laced tirade is unknown to me. As far as I can tell nobody was hurt.
Posted by Daryl Surat at 11:03 PM 2 comments:

You thought you knew everything about Anime Hell this past Friday night at AWA? Well, you don't know the REAL STORY. The REALLY REAL story of all the sordid goings on behind the scenes! The love, the hate, the ups, the downs, the horrifying nightmare of destruction which led to all the anarchy that we are still recovering from. I do want to point out again that ALL of the wedding ceremonies performed at Anime Hell have been rendered NULL AND VOID by a special act of the City Of Atlanta.

We started a bit late to allow the crowds to filter in and get their safety goggles properly adjusted. Gavv threw some candy and we dimmed the house lights and cranked things up. Here's what we showed:

DOOM and Death await you Sat. night at AWA! 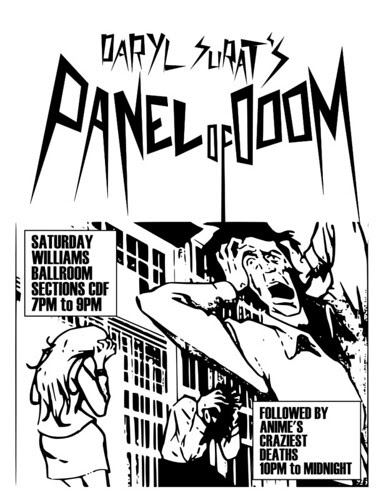 Saturday night at Anime Weekend Atlanta sure is busy, but if disco or bebop isn't your thing and you've lived through Japanese Anime Hell on Friday then boogie on down till you're SIX FEET UNDERGROUND with me at the Panel OF DOOM! Now simply too large to be contained within the Kennesaw Ballroom, from 7:00 PM to 9:00 PM we're taking over one half of the Galleria's Williams Ballroom for two more hours of bizarre clips, pop culture detritus, and NINJA attacks. Also: anime! Who'da guessed?! Featuring the hypnotic murder music of Cold Slither and the Demon 5, this year's Panel is GUARANTEED to offend and/or cause insanity to all who dare attend, much like all the others over the past...man, has it been six years now?!

But wait, there's more! From 10:00 PM to midnight in the same room is the return of Anime's Craziest Deaths, now at twice the length of AWA 2008's! What is this panel about? Read the panel title to find out! What sort of content will it contain? Read the panel title to find out! No ID check will be required, but two hours of graphic cartoon violence and mayhem is probably not suitable for the young'uns, who should be asleep at that hour anyway! The rumors are true; the death panels you've heard about so much on the news and read about on the Internet are REAL, and they'll be pulling the plug not just on Grandma, but EVERYONE! Hopefully this time someone won't pull the fire alarm.

Oh yeah, we donated almost all the prizes for the Ouran High School Host Club Challenge, too! That was like $2500-$2800 worth of stuff, as in two thousand, five hundred dollars plus (which counts as "over $1000")! RECOGNIZE.
Posted by Daryl Surat at 1:09 PM 2 comments:

Thanks to everybody who came to the show Sunday night, I hope you enjoyed it as much as I did. And Thanks to Bruce, Ed, Mila, Avery, Steven and Katie for the help. I hope we can do it all again at YuleCon.
Posted by Unknown at 8:25 AM No comments: 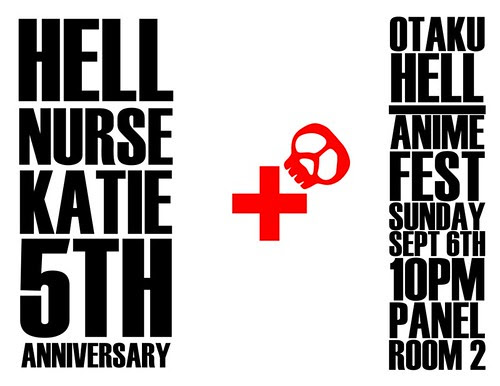 animehell
Posted by Unknown at 2:01 PM No comments:

animehell
Posted by Unknown at 9:13 AM No comments: