For most of the year I've been posting my DOOM! lists over at Anime World Order but I'm reminded my login still works here. A full con report will be posted there, but for now:

A record-setting 25,000 people showed up to Anime Weekend Atlanta, and roughly 10% of the convention--that's 2500 people!--went to Friday's Anime Hell in Main Events. Saturday though is "the busy day," with major concert performances, dance events, music video and costume contests, dub premieres, and adults-only programming are all going on concurrently. The con continues to grow, but the purpose of DOOM! remains the same: to offer up an alternative to all that.

DOOM!'s new location this year was in Williams Ballroom E, the perfect "it's one of the biggest rooms but not the biggest room in the place" sized venue for it. If I had any critique of the venue it's that the ballrooms that size really need two projector screens, one on each side. This just had one single screen in the corner, but I anticipated this possibility (it happens often) and kept the subtitled clips to a minimum. I didn't even know where the room was until about an hour beforehand, and while that's normally lighthearted con absentmindedness, this year all it reminded me of was the last correspondence I ever had with Dan Baker: saying I didn't know the time and venue but would let him know. Danno would always whip up a silly flyer image and post a blog update with the location and start time info on my behalf, and needed me to tell him that for him to start. By the time I'd gotten word, he'd passed away. I just couldn't get into the necessary mindset to put together a playlist, but the benefit of running everything off of a computer is that you can put stuff together moments before and/or on the fly. I did more of that than usual this year.

But it all worked out. Despite lots of evening competition vying for the attention of congoers, but 90%-95% of the room was full and stayed that way through to the end when we had to clear out to make room for the debuting 18+ cosplay event. The Surface Pro 2 tablet has officially replaced my bulky laptops of the past, and I had no errors with adapters, tech hookups, files not playing, clips bugging out, crashes, or any of the usual antics. Good thing too, since with everything going on if I had needed a tech guy there would've been very little chance of getting one. Afterwards, one person thanked me for "being the only panelist who didn't have any tech difficulties" (on cue, I then disconnected the audio from the tablet, causing a big ol' eardrum damaging feedback BZZZZZ) and another noted that he'd been attending AWA for 12 years, had never even heard of my panel until now, but would be sure to tell his friends for next year.

But will there BE a next year? It wasn't until Sunday morning that I finally went into the Kennesaw ballroom for the first time the entire convention, and it dawned on me how many people I'd sat and joked with in that very room were now dead or otherwise not present. Hopefully I'll still have people willing to make the trip with me come 2016...

Pre-DOOM!, I showed some short bits: about half of the animated music video "Transfer," the "Deprive" segment of Robot Carnival, and "Prosthetic Moses" (a ghost with tap dancing shoes set to "Moses Supposes" from Singing in the Rain).

As for What Got Shown (this list is not in sequential order):

The Top 5 Viral Pictures of 1911, the entire alley fight from They Live, Sonic the Hedgehog's inability to summarize Dragon Ball Z, praising Sonic the Hedgehog for being a deaf woman, the Nigerian special effects bonanza that is B14 ONE AND TWO, Bill Plympton cartoon on the dangers of setting domesticated pets free in the wild, Black Dynamite's manequin teaching hard lessons to pro wrestlers and MMA fighters in Japanese variety show fashion, the Eagle's Nest Ministries warning us of the dangers of Skeletor and Dungeons & Dragons, the live-action Assassination Classroom, Bounty Hunter Hard in a rather improbable car chase, Tyrone explaining dogecoin, the Sci-Fi Channel's early 1990s ads for adventures in Japanese animation, Baki the Grappler punching an ape in his brain after repeated groin strikes (first question after panel: "what was that one anime with the guy fighting the ape?"), multiple horndog Amuro Ray-centric episodes of Gundam-san, Lupin the Third escaping justice once again thanks to the power of police racism, Ronald McDonald the creepy stalker, Segata Sanshiro's repeated assaults on children who dared to not be playing Sega Saturn, Metal Gear Payback, that Kirstin Dunst "Turning Japanese" music video by McG that I wouldn't dare show at any other convention besides AWA because it has a few shots of cartoon boob I forgot were there, Cooking With Scorpion, the opening scene to "Stone Cold" starring Brian Bosworth, the best bodybuilder fight in Indian cinema, Danger 5 goes super sentai once again, the Buddha's Palm vs the acidic zit dwarf, Metal Gear Raiden: Snake Eraser, Vegeta fights Cup Noodle, Frozen meets The Thing, Inferno Cop versus the FBI, Air Man Will Not Die (by popular demand), Metal Gear Sunrising, using Kirin Litchi to get sempai to notice you, le film de Mutafukaz by Studio 4C, and of course GARBAGE DAY.
Posted by Daryl Surat at 3:21 PM No comments:

Thanks to everyone who came out to Anime Hell Friday at AWA. I managed to convince the staff to NOT clear the room after Totally Lame Anime, and to NOT check IDs to ensure everyone was over 21, and we thought the show was going to run as smooth as ever, and of course DVD technology CANNOT HANDLE THE AWESOMENESS OF ANIME HELL, so there's that.
Confidential to the guy that wanted me to show the "Ant Lion" video - that video was part of Neil Nadelman's "Totally Lame Anime", and not part of Anime Hell, which is why I had no idea what you were talking about.
We showed: Barkira, John Waters advising people to smoke, Yogi's Ark intro, Hero High, Hammerman, Momoiro Clover Z meets Kiss, One Punch Man, an Idolmaster ad, Lupin III, Yamato 2199, Psychosomatic Comical Anime (watch it on Crunchyroll), clips from CNN and Blue Blazes and Gundam Build Fighters, the trailer for CYBORG 009 VS DEVILMAN, Suzuki Hustler ads by Akira Toriyaman, Dragonball traffic safety videos, the truth behind the death of Minky Momo, Dragonball Fire Safety, the live Astro Boy, the Prison School trailer, ads for Georgia Coffee and Ryujin Ginko and Macross Pachinko and Oasis and Dragonball pool eye drops, a video from the Japan National Federation Of Cooperative Agricultural Associations, a great CG Ultraman clip, a Manulife ad starring Mazinger Z, the Georgie Girls, HAMMERHEAD, Batman for savings bonds, Schick EVA and EVA tomato ads, Heidi's grandpa rapping, God and Satan for Pocky, Good Morning Doronjosama, a tribute to Mike Horne, Butthurt Anime Fan, I CAN FRIDAY BY DAY, and I wrapped things up by sending a long-distance dedication to our pal Danno who's not with us any more. We miss you, Danno.
Thanks again to all who came out to the show and we'll see you in 2016!

Email ThisBlogThis!Share to TwitterShare to FacebookShare to Pinterest
Labels: AWA

An Object at Rest from Seth Boyden on Vimeo.

I've been tasked with sorting through all the external drives and discs and storage and boxes upon boxes of video. Copies have to be made for his family; friends have requested what they can. We're all still processing what's happened.

I'd like to thank those who have come to us to offer condolences. It's always hard to be strong at times like this without becoming brittle and risking a shatter. You bend, you adjust, and you keep on gong.

And I hadn't really been able to cry about it until now. I knew there was a lot that had to be done and crying's for later. But it's later now and I'm really, really going to miss my friend.

So, while sorting through drives, I found this video in a folder that said "A-Kon Hell 2015" and I don't even remember if we showed it or not because that was a lifetime ago. But here it is.

We're still going to do Hell as best we can. It's not going to be the same without Danno at the helm, but the show was what he lived for. I'm glad that we had a year with no problems and he was able to smile at all of you.

He had a smile, really, even if he never drew himself with one.
Posted by Dr. Mila at 2:46 PM 1 comment:

A pile of junk!

Posted by Chris Sobieniak at 9:05 PM No comments:

No one told me there was an action figure

Now, I really want one.

It's the 21st AWA and that means one thing. Anime Hell. 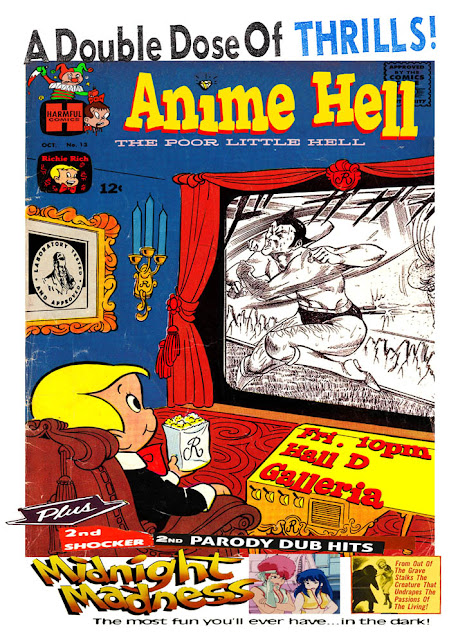 It's all happening in the giant Hall D in the Galleria at 10pm Friday Sept. 25 at Anime Weekend Atlanta!!!
Posted by d.merrill at 11:48 AM 1 comment:

Soooooo, the show was actually at 10 PM in panel room 6. Oops.


I always wondered what he was singing.

Well, here we are, after 15 years with Anime Fest and we had A FANTASTIC SHOW.

We did have a little confusion on the announcement, however:

Comment I just left: "Cincoanera? Did you by chance mean quinceañera? The latter is a party for a girl who’s turning fifteen...

"...the former is not an actual thing, but references someone having five anuses. Might want to fix that. Ugh."

As long as it picks up after itself, it's welcome to the show.

We had tiaras this year, and all our Camy walkers got one. A couple of our Hard Gay posers got tiaras as well and they earned them.

Danno gave a lovely speech about how the show started and the history of Anime Hell at A-Fest. Katie gave a...speech bout underage drinking. I didn't give a speech about anything as I was too busy dicking with my hair.

Katie had made a Hard Gay pinata and that was given away as a prize near the end of the night. The lucky fellow who won it (a fellow doctor, I might add) let us know this was his first Anime Hell. I'm sure he'll be back.

One surprise from the night was Danno's copy of When I See an Elephant Fly (I didn't know he had a copy!). Kris took a little time to clear up the controversy about the segment, so we're still an edutainment panel. We're always out to push a button and see what lights up.

All in all, a great show and a great audience, as always. You are always why we do this. Hopefully, we'll be able to post stuff on the blog more regularly once everyone's work schedules settle.
Posted by Dr. Mila at 3:00 AM 1 comment: