A Brief History of Toku Hell

It had to happen sooner or later. Ended up being later.

For those that are unaware, I'm Mike Dent. Known as the host/producer of the podcast R5 Central, my recent claim to fame is through a little event called Tokusatsu or "Toku" Hell. That's right, the likes of Super Sentai, Kamen Rider, and Ultraman in a Hell format. Our tagline is "If it involves spandex, rock quarries, and explosions, we've got it covered."

The whole thing started at ACen 2008 as I attempted to salvage the disaster that was my podcast panel. I had planned on doing something of a Hell format for half of the panel, then switch to a Robot Rumble-styled activity for the rest of it. Thankfully, the showcase ended up being the highlight of the evening. Sure, the high numbers were thanks to the "Free Yaoi" sign I posted outside the door but was still memorable. I think.

I retooled the format a bit, turning it into a non-stop Robot Chicken-ish showcase, and did "Toku Hell: Otakon Edition" at that year's "Henshin Heroes And You" panel. All edited and subbed using Windows Movie Maker. Why? Because I'm a cheap bastard. The last stop of the year ended up being at SITACon 2008 with the cleverly titled "Toku Hell: SITACon Edition". It was there when we had the legendary reaction, "THIS IS POWER RANGERS!!" This coming from a young woman in a china dress who felt the need to stand up and point at the screen in the middle of a Den Ace episode.

Jump-cut to the present: The chaos has begun once more with "Toku Hell: The Revenge!!" at Anime Central 2009. Together with Midwest Convention Cosplay Casanova, Cardcaptor Will, we unleashed a brand-new showcase on a standing-room only audience. We were the only Tokusatsu event of the con, meaning that we ended up getting the influx of fans pent up to get their fix. Thanks to an overall positive reception, we may end up running it next year. Hopefully next time though, we won't be rushed out of the room at the last minute by the oh so important "How to Write A Lemon" panel.

With the apparent demise of SITACon and the lack of a Tokusatsu panel at Otakon this year, the next appearance of this growing phenomenon remains uncertain. Until the next, stay tuned....and beware! Maybe.

animehell
Posted by Unknown at 10:09 AM No comments:

Anime Boston went pretty well. Sometimes a picture is worth a thousand words: 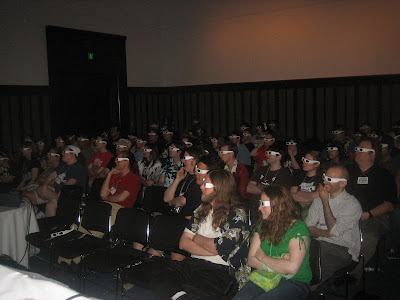 Which means I now need only write ONE thousand words instead of TWO! My first visit to Boston in over 25 years, made possible thanks to the generosity of stewards Mike Toole and Mike Horne (whom I'll refer to as "LSanto" from this point on), was a good one. By all accounts the convention broke all previous attendance records while fixing the notorious registration line issues which befell it in years past, so I picked a good time to start attending. As one can infer from the faboo flyers Danno drafted, Hell was Friday night at 10 PM in Panel Room 207. Night time programming at Anime Boston consists of almost entirely raves and 18+ fare, and between that and the fact that there wasn't really anywhere set up within either the Sheraton hotel or the Hynes Convention Center for us to actually put up said flyers, we weren't sure if people would know it was going on. Fortunately, when your con has 15,000+ people in attendance, you can still easily manage to more or less fill up a panel room. Especially when you're the only live event on the schedule that isn't porn-related! The picture above is about half the room.

Mike and Mike managed to acquire some vintage 3D trailers along with the Bollywood Harry Potter (IN 3-D!) on DVD, while also getting a hold of a few hundred pairs of 3D glasses courtesy of the same company that made them for Monsters vs Aliens and such. Were it not for the fact that we needed them on short notice, we could have paid a little extra and gotten them to print "Anime Hell" on the sides, but such is life.

A/V tech matters are always an ongoing issue at Hell, and they weren't helped much by the fact that the previous panelists had spilled a bunch of water on the necessary cables. With two laptops and a DVD player to contend with (Mike and I had laptops, LSanto had DVDs), Dave may be surprised to know that it was the DVD player giving us the most trouble. I think it was more an issue with the DVDs themselves than the equipment, though. With only enough cables provided to enable instant switching between one laptop and one DVD player (with increasingly exasperated AB tech staffers in control of volume, mics, and video output), our game plan basically worked out to "Mike shows some stuff on the laptop, switch to LSanto's set on the DVDs, connect the laptop cables to my laptop so I can show some stuff, switch to DVD, etc." It worked out.

Being Hell and all, perhaps it was fate that so many of Mike's clips were related to the Bible: Superbook interstitials, the Hell mainstay I Am God ("I see all...and I fight evil!"), Spunky the dog, and such. Plus some of the classic "live action vs anime" bits which I sold as "the anime...IN 3-D!" Mike's deftful weaving of my clips detailing the struggle between Ivan the Red and the disciples of Master Gordon proved that The Ninja Squad is the Colt 45 of Anime Hell: It Works Every Time. The same cannot be said for Space Taxi (and perhaps Monkey vs Robot), though that was made up for by the various clips that Mike stayed up until 5 AM rendering in Adobe Premiere, which all went over quite well. His Silent Moebius/Family Guy "Katsumi / Cat Sue Me" clip got big laughs, and the cartoon pigeon version of Orson Welles seamlessly becoming cartoon pigeon version of drunk Orson Welles filming the wine commercial synced up quite nicely. I never heard of Fred Basset until this weekend, but after seeing that cartoon I can attest to the fact that yes, Fred Basset is not funny. Future installments of Hell shall correct this!

Mike's God stuff was clearly the soul of Hell, which makes LSanto's 3D offerings the heart. Actually, most of the trailers shown were not in 3D at all, and we just insisted everyone put on the glasses so they'd get headaches as we insisted "no really, it's in 3D!" Those brave enough to stick around to the end got to see the real deal once he found them on the menu. Our only regrets are that he couldn't find the 3D Quidditch match on his Bollywood Harry Potter DVD. I'd advise him for future installments to make the clips in advance and then author a DVD of just those clips with chapter stops and a menu and stuff, but the only PC tool I know that adequately does the job menus-wise is DVD Lab Pro and that damn thing is too complicated.

The Mikes were the heart and soul of Hell, and could have done a fine job without my presence. But I was there, so I decided to pour blood all over the proceedings. As is my habit, nearly all of my clips involved people being maimed for comedy's sake. I didn't want to fall back on Forklift Driver Klaus, so I used my Panel OF DOOM! equivalent, "Will There Be a Tomorrow?" As Twitter put it, "Anime Hell was the most fun I've ever had watching a man get his finger ripped off." The general reaction to The Heroic Trio trailer was "the FUCK?" and between JCVD's inspirational speech from Street Fighter and the secret origin of Bibleman, I'm sure everyone was ready to get in their boat and go upriver with the Full Armor of God. My big gamble as far as "could bomb horribly with the crowd" goes was Garrett Davis' 2007 short "Story From North America," but thankfully the crowd ate it up. (I was told afterward that a good bit of the audience had already seen it.) I closed by running the first 5 minutes of Covert Operatives in honor of the fact that back in Florida, JACON was in its final year. My usage of keyboard cat was restricted to one 30 second bit, though my thunder was stolen since the preceding panel ended with a more different keyboard cat.

As Victoria Gadson aka Viga noted here, "Daryl Surat and Mike Toole f*cked my brain..." All in all, I'd say this was a mighty success. See you at AWA, folks!

animehell
Posted by Unknown at 10:26 AM No comments:

This weekend there's not one, not two, not three, but FOUR Anime Hells for your enjoyment!


Animazement
Friday, May 22nd
10pm to Midnight
at the RCC Main Ballroom


animehell
Posted by Unknown at 8:45 PM No comments:

animehell
Posted by Unknown at 6:56 AM No comments:

Anime Hell Nite in Canada 2009 from tohoscope on Vimeo.

animehell
Posted by Unknown at 6:00 AM 5 comments:

What do you get a fan of Forklift Driver Klaus?

animehell
Posted by Unknown at 10:21 AM No comments:

Hell (nominally of the Anime variety) returns to Animazement 2009 at 10:00pm on Friday, May 22nd in the new Raleigh Convention Center. This year I guarantee more psychadelic animation than is strictly necessary, among other delights.

Matt talks Trek over at CPF!

animehell
Posted by Unknown at 8:14 AM No comments:

May is Anime Hell Month!

May Hell Shows 2009 from tohoscope on Vimeo.

animehell
Posted by Unknown at 10:47 AM No comments:

He carved out a name for himself in the blood of his enemies. Hail Caesar.

Central Hellfest 2009 from tohoscope on Vimeo.

animehell
Posted by Unknown at 1:17 PM No comments: