Once more, with feeling

(Go to the YouTube site and watch the high quality version, which actually looks high quality instead of the fistful of pixels in the normal version)

Anime Hell is pleased as punch to be back at Ohayocon for what feels like the 50th year.

In fact, the powers that be within Ohayocon were excited enough about Anime Hell's room-bustingly huge overflow showing at Ohayocon 2008 that we've been asked to provide two shows this year!

One will be at its regular Friday night time slot in what we hope will be a bigger room and will be hosted by those stalwart souls Gavv and Rich Lather (hey, that's me!). But for the first time ever, the second show on Saturday night will have new hosts! We're proud to welcome a terrible Texas twosome who bear many scars from Anime Hell events throughout the southern half of the United States: Danno Baker and Ohayocon guest Bruce Lewis! And dare I say that a return appearance by Hell Nurse Katie may be in the works?

To commemorate this unprecedented spectacle, we've decided upon a pro wrestling-themed program. No, it won't be completely full of wrestling clips, but you can expect some interesting changes in how things are presented!

And remember--this is not AMV Hell. This is Anime Hell. If you came here only to see AMV Hell, get the f--well, you know. Long, long ago--why, it's been nearly two days!--Dave Merrill once pointed out "the great thing about Usenet is that every embarrassing, ranty message is preserved forever and ever for our continuing entertainment." Fanzines, APAs, and all that other pesky print stuff make it such that the follies of one's wasted youth may be forever forgotten once the issue vanishes. And that'd just be a shame, wouldn't it! With that in mind, my fellow AWO cohosts Gerald and Clarissa took it upon themselves to begin an Otaku Archive, a scanning project for the preservation of all those con program guides, fanzines, newsletters, posters, badges, and such from the infancy days of US anime fandom before the advent of the World Wide Web. You know, like what Dave's talking about in today's Let's Anime post.

After a year and change the website's still not live due to concerns about "content management systems," but after some prodding from "Battlehork" James by way of the establishment of this Flickr group, it was decided that in the meantime the fruits of their labors thus far could be viewed here. As you can see, each thing scanned is available in multiple sizes ranging from "I can't read this because it's too small" to "I can't read this because it's too big"! Don't worry, there's also "I can read this!" sizes available, which is why special thanks are due to the Archduke of [Anime] Hell Ryan Gavigan for contributing many things, including this beaut: 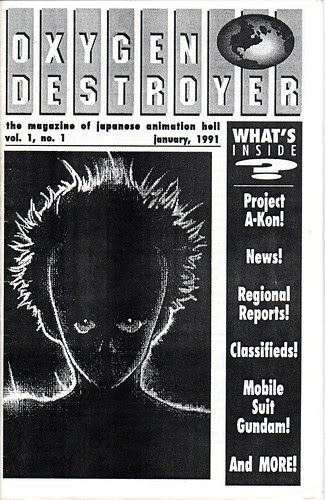 Yep, before the days of this blog that you're reading RIGHT NOW there was Oxygen Destroyer, so named after the big ol' dry ice bomb used against Godzilla. Put together by a host of luminaries such as Dave Merrill, Matt Murray, and CB Smith of Corn Pone Flicks infamy (say, 2009 is one of them big deal anniversary years!), these guys must have been like, twenty or so at the time. With headlines such as "FIRST NATIONAL ANIME CONVENTION A SMASH!" declaring Project A-Kon a riveting success due to the premiere of The Making of the Star Dipwads, there is no way this should be allowed to fall into the annals of history! Also included is a Star Blazers fanfic, reviews (which despite being written like 20 years ago strikes me as more rad than what I'm writing TODAY), THE TRUTH about conventions, and an ad for the Animeigo release of Riding Bean! Say, that's what the next AWO is about!

And on that note, perhaps nothing for me illustrates "history repeats itself [try and you'll succeed...]" more than Oxygen Destroyer's opening manifesto, which so closely echoes that of both the Anime World Order podcast and Otaku USA Magazine which came on the scene over a decade and change afterwards:

Anime fandom has come a long way from the early days - the modern availability of animation far surpasses the existing documentation. In other words, there's lots of anime but not much knowledge. We are going to try to be something more than just another anime fanzine, full of traced artwork and yet another Z GUNDAM episode guide. The object, very simply, is to publish a magazine that we would want to read.

Despite owning a scanner myself, I have not so much as lifted one finger to aid in this endeavor since I don't have anything anyway. In fact, neither do Gerald and Clarissa because we weren't in anime fandom at the time! So here's my contribution to the cause: much like all those conventions Rob Fenelon staffed back in the day as well as Oxygen Destroyer itself, the success of the Otaku Archive now hinges upon YOU, dear reader, so check out the initial batch of scans (currently unorganized, but once the site goes live there'll be tags and stuff!), get those forgotten relics from out of the attic / garage / closet where they've been buried, head on over to the Anime World Order homepage and send us an email! AND TELL 'EM DARYL SENT YA.

animehell
Posted by Daryl Surat at 8:35 AM 5 comments: