2014 was my first AnimeNEXT, and though I'd been saying I was never too keen on "Panel OF DOOM!" as an adequate descriptor, for 10 years I couldn't think of a better name. Taking a cue from the subtitle I added onto AWA 2013's, I settled on adding "Stupid Video" to the front of it. That way everybody could tell at a glance from the name as printed in the schedule what the panel would be about.

For a first-year panel, I'd say turnout was relatively decent: maybe 60% capacity? Far be it for me to lay any culpability on myself, so I'll give two justifications for that. First, the room had only one projector screen situated in the corner, so seats on the opposite corner were likely to have a hard time seeing the screen. More importantly, it was brought up to me that the Bridgewater hotel in which the panel was taking place was a brand-new addition to the con's layout as of that year. The convention was split up across four buildings, only two of which had an interconnecting pathway. The remaining two hotels required you go outside and walk 5-10 minutes, crossing outdoor streets and bridges, and (on Friday) without any signs in place. Since the new hotel wasn't within line-of-sight to the other buildings, I never would've known that hotel was even part of the convention had I not been told.

I was also a bit concerned that they had panel programming split up across multiple buildings, such that there were three rooms called, for instance, "Panel 1" which was the designation for the room I was in. You just had to know "Bridgewater Panel 1" wasn't the same as "Doubletree Panel 1"...which wasn't easy because the Doubletree had panel rooms ALSO named "Bridgewater." The big sign in front of my panel room said "Panel 4," but it was actually "BW Panel 1." People eventually figured this all out, but my hope for next year is they just give everything a unique number designation, then state which building it's in afterwards. 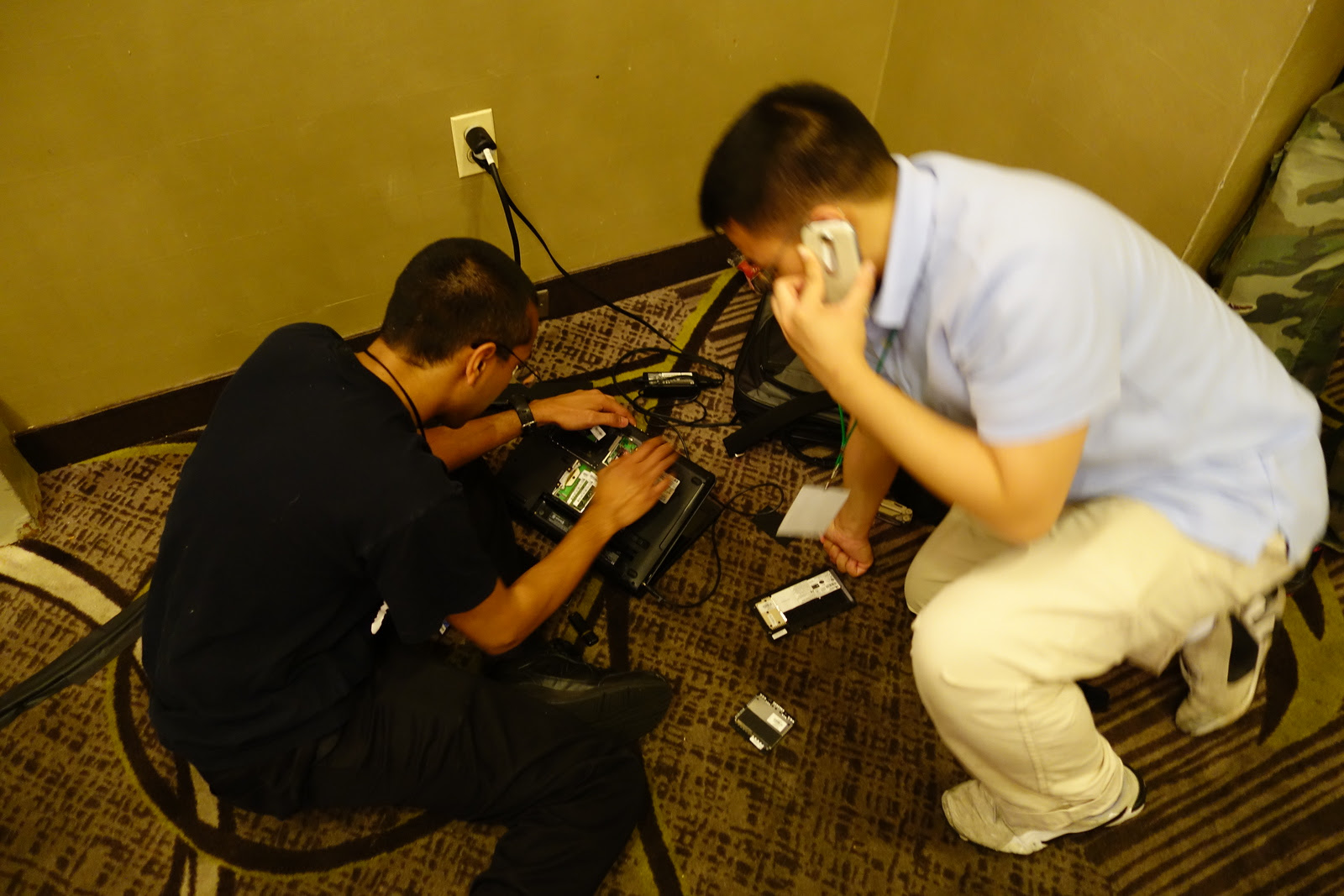 Oh, but it wouldn't be Hell/DOOM! though without technical difficulties, now would it? In the leading moments to the panel start time, my laptop which has served me in my DOOM! endeavors ever since I stopped running off VHS cassettes decided to finally die for good. It just wouldn't post. I always make a backup of everything onto a flash memory stick for such eventualities...and then it turns out that I packed the WRONG stick in my bag. (Before anyone asks: as is standard for most conventions, panel rooms weren't equipped with DVD players.) Staff/Tech Ops really bailed me out here. Thanks to creative use of a multitool knife as a makeshift screwdriver, I was able to diagnose the problem and figure out "well, if I could just remove the hard drive and connect it to another computer, it'll work." As fate would have it, one of the staffers packed a USB SATA enclosure and my laptop hard drive wasn't THAT ancient (there was momentary concern when it wouldn't fit, but it turns out the drive had a F-to-M adapter on it), so DOOM! started a mere 5 minutes late or so! Well. I guess I'd better start shopping for either a new laptop or a tablet capable of outputting video and running Windows. Kind of a tough expense to justify when literally the only use I have for the things is to run panels at anime conventions, but so it goes. Here's the list of what got run, most all of it items taken from THIS VERY BLOG:
More...

Laundry Day (I'm always concerned to run things seen by millions of people; a few remembered seeing it but 2014 is the year to run Sailor Moon parodies)
Elvis Is Speed Racer (nobody seemed to know about Viva Las Vegas or pick up that the song was from Speed Racer)
Nuigulumar Z Trailer
Kanpai Senshi
Bowser Says the N-Word in Mario Kart 8
Saison Credit Card commercial
Katsuhiro Otomo commercial from 1984
Doraemon Akira style (nobody seemed to know who Doraemon was or what Akira was)
Pepe Deluxe - Salami Fever
Welcome to the NHK - Sato Discovers Internet Porn
Sailor Moon Stars eyedrops commercial
The Women of Robotech
Midori Anzen - Bunen commercial to encourage gaijin to come to Japan, where indoor smoking is permitted
Science Ninja Team Gatchaman - Murder Music (I experiemented with running all the clips in order rather than spacing it out...it didn't go over as well)
Turkey Shoot trailer
Turning Girls episode 2
Sesame Street - Cracks
Cock Puncher trailer
Bushido Man trailer
The Wizard of Speed and Time
My Friend God
Doozy Bots (didn't get too many laughs; I had to explain "those are SD versions of the robots from Mobile Suit Gundam")
Sivaji the Boss
Your Anime Superstore commercial
Superman Never Says Yes to a Cigarette
Yogi Bear Cigarette PSA
Game Launch Rock!
Chuck Norris Missing in Action
Sidekicks (despite not knowing some of those anime bits, lots of people seemed to immediately realize this clip was from Sidekicks)
Gdgd Fairies Season 2 - Pkpk Clones
The Cat - Cat vs Dog fight
20/20 - Nuts for Nintendo with John Stossel
Old Glory Insurance
Japanorama - Cosplay
Ninja III: The Domination - Ninja vs Golfers
The Ninja Squad - Ivan the Red's First Victim (after what happened with Gatchaman, I left it at just the first clip rather than show the rest)
Charge! Men's School episode 4: We Can't Lose to the Foreigners!
Be A Man Samurai School - Somersault Instructions
Look Around You - Slimby and the Special Picture
Domain of Murder - Finale
Bring Me the Head of Charlie Brown
Pong?
Sukeban Deka - Breakdance Fight
Monkey vs Robot
Danger 5 Season 1 Trailer
Chargeman Ken - Dynamite in the Brain!

I've had some really bad technical problems before a show, but that beats them all.

Much more interesting than the Japanese did it with having to replace a whole computer.

Well, I suppose it worked as something they haven't seen before so at least they came out learning something new!

Where these by Rhoto? They pulled the same stunt with DragonBall characters.

The Women of Robotech

Midori Anzen - Bunen commercial to encourage gaijin to come to Japan, where indoor smoking is permitted

If that don't get 'em, nothing else would! Of course nobody half my age will remember a time when you could smoke in a normal restaurant around here. My mom did that all the time.

Science Ninja Team Gatchaman - Murder Music (I experiemented with running all the clips in order rather than spacing it out...it didn't go over as well)

The Wizard of Speed and Time

Doozy Bots (didn't get too many laughs; I had to explain "those are SD versions of the robots from Mobile Suit Gundam")

Oh well, I don't expect today's tots to know that.

Found something else H-B did that was also important.
https://www.youtube.com/watch?v=jNsKGx94_KE

Bring Me the Head of Charlie Brown

Hopefully people haven't heard of this yet!