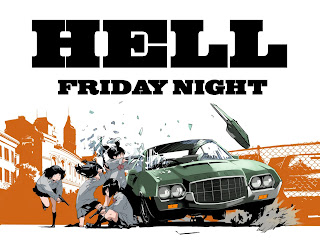 This year was Animazement 20, so we celebrated the occassion with a sprinkling of old Hell favorites among the new selections. Here's the complete rundown.

01 - JPP - "Puikkoristikko" ("Cross of Sticks") - We kicked things off with a classic clip from Animazement's past, transferred from my old VHS copy for the occasion. I'm not sure exactly when this was last shown except that it was before I started keeping more detailed notes circa 2005 and dates back to the mysterious Tractor Video era of the Animazement Hells. As for the clip itself, it demonstrates my "you can open Hell with anything" philosophy, with a slow burn culminating in a magnificent finale.

02 - Death Metal - As seen at this year's Nevermore horror film festival, this delightful short illustrates the perils of making bargins with Satan to totally bring the metal. Thanks to director Chris McInroy for providing the screener copy.

05 - Glenda, The Classiest Galaxy Tourist : Episode 1 - Exactly as advertised, with Glenda bringing every last bit of class she has on her trip to The God's Door. I can't wait to see how she brings the class in Episode 2.

06 - Hebocon World Championship 2016 - A half-hour in we decide that at some point we should show at least one clip with some tenuous connection to Japan. Thankfully, the very crappiest of all robots have once again been called together to do battle in another thrilling documentary installment of the Hebocon saga. Never has the overture from Tannhäuser been so magnificent. ALL HAIL POLE DANCE ROBOT PARTY ROCK ANTHEM!

07 - Afternoon Class - The harrowing story of one student's desperate attempt to stay awake during the most boring class possible.

08 - Mighty Mister Titan - After such an effort to avoid falling asleep, clearly an exercise break was called for. We could not begin to top last year's amazing Attack On Mighty Mister Titan segment, so we didn't even try. That said, this year's episode of the regular ol' show did feature frog kicks, which were only attempted by the most dedicated of exercisers.

09 - Orange Range - "Sushi" - Surprisingly enough, when I asked the crowd of anime fans if they liked sushi, the answer was yes. Who knew? Meanwhile, this music video helpful depicts the intense longing we all share for delicious sushi.

10 - Dead Sushi Trailer - We continue the sushi theme with this gem from schlock director extrordinaire Noboru Iguchi. I guarantee that this trailer has all of the hot sushi action you could possibly want.

11 - Barnes & Barnes - "Fish Heads" - And, extending the theme to dead fish in general, we pay tribute ot the late Bill Paxton with this, his directoral debut and earliest starring role. This was another encore clip, having last been shown at Animazement 2007 and being rescued from another aging VHS tape.

12 - Sniffy Escapes Poisoning - And now, for the educational portion of the show, we observe a young child trying to murder his pet dog - which isn't nearly as the grotesque animation and the agonizing musical numbers.

13 - Ghost Squad - And, speaking of kids being killed, it's time for Ghost Squad! It's just like Ghostbusters, except totally different. If this doesn't turn out to be the pilot for a hit television series then it's proof that we live in an unjust world. Dig that awesome theme song!

14 - Ghettoman - Sadly, they can't all be winners, not even when they involve Adam West's Batman bumping butts to funky music. I billed this clip - which, god help us, was broadcast on national television in 1979 as part of the TV special Legends of the Superheroes: The Roast (hosted by Ed McMahon, no less) - as the latest preview trailer for the new Justice League movie. It went over like a lead balloon, which I really should have expected. Ah well.

15 - The Gong Show Montage - And, while we're celebrating the magic of 1970s television weirdness, we paid tribute to the late Chuck Barris with a montage of clips from The Gong Show, the Me Decade's answer to zany YouTube videos. I'd also like to point out that we live in a world where The Gong Show Movie is available on Blu-ray.

17 - Pollie Wants A Pickle - From Tim Maloney (who went on to animate a lot of particularly choice Negativland music videos) - and whose "My Friend God" is an old school Hell classic - here's the story about Pollie and her quest for...the pickle. I particularly liked the "Bimbo's Initiation" reference.

18 - Double King - And, for our big finale, Felix Cosgrove's latest, which continues to achieve well deserved viral acclaim. We love you, Felix!

19 - Time To Say Goodnight - Thanks for coming, everybody! Please be sure to throw away your trash and have fun at the rave!

Overall, it was another fine year of Hell. In the spirit of the big anniversary year, I note that this is the 17th time I've run Hell at Animazement, taking over from Dave Merrill back in 2001. Here's hoping we can continue to keep the Animazement audience entertained for many years to come. I'd also like to take a moment to pour one out for Joe Maxwell, one of the founding members of Animazement and the convention's original chair, who passed away this past year at age 52. Joe loved attending the early Hells at AWA and, as I understand it, was responsible for talking Dave Merrill into bringing Hell to Animazement in the first place. Thanks for everything, Joe.

As ever, kudos go out to the Hellions: Cameron Blashka, Jared Blashka, and Chris Culpepper. I could not run Hell without them. Also, thanks as always to the folks with American AV, who do a great job every year. Sadly, this year technical difficulties meant we didn't have access to a Blu-ray player - it's a long story - but that only happened despite heroic efforts by the folks at American, who frantically tried to make it happen all throughout Hell. Next year for sure!


Glad to hear that AZ's Hell went well, and that's terrible news about Joe Maxwell, who indeed graciously invited me to the first Animazement and asked if I'd do Anime Hell. The convention he started, well it started great and it remains so.

Thanks for the kind words, Dave, and for confirming my understanding of the Animazement-Hell connection. I hadn't seen Joe in many, many years, but I remember him being absolutely one helluva nice guy and was very sad to hear that he'd passed away far, far too young. There's an ever increasing number of folks who have Joe to thank for both Animazement and our local flavor of Hell each year, so his legacy lives on in that.