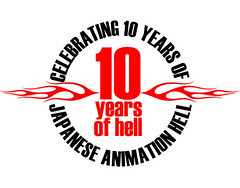 This year's Anime Weekend Atlanta marks a decade of Japanese Animation Hell. That's right. 10 long years of Dave hauling boxes of VHS tapes to AWA. And I want to take this moment to thank Dave for doing it. If it weren't for Dave there'd be a little less laughter in this world, and Friday nights at AWA would certainly be less fun.

Without realizing it, Dave had created more then just a freeform video clip show. Japanese Animation HELL was subversive and underground and DIY and yet it was something simple and entertaining: just a guy playing video tapes. A simple idea. And like any good idea it had a life of it's own. Japanese Animation HELL would inform and inspire many of us to go out and do our own wacky clip shows at anime cons across the country. And here we are 10 years later still looking forward to Friday night at AWA.

So join us in celebrating 10 years of hell and saluting Dave Merrill for starting all this. Thanks man, you rock.

animehell
Posted by Unknown at 11:00 AM