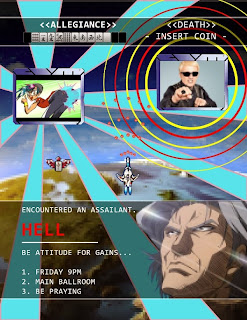 With the old, incredibly competent AV crew back in charge, this year's Hell went off without a hitch. We rocked a full house and, wonders of wonders, it was possible to make out what was happening on the screen. The Animazement forums have given up the ghost, so all the details await you below the cut.

01 - "She Is Young, She Is Beautiful, She Is Next" by Perturbator - No sooner has the Hell Dance Party wrapped up than we kick things off with an awesome slice of synthwave.

03 - Dear vs. Bear trailer - It's like a cross between Bollywood and the Asylum guys who make those awful TV movies for Syfy, but in the very best possible way. Of course, by "best" I mean "What the hell?"

04 - "FM" by Crayon Pop - Tuxedo Kamen got some applause, sure, but the Master Chief cameo is what really made the crowd go wild.

05 - The Unmarketables - They're not premise driven!

06 - Mystery Boy - It turns out that the Hell audience loves nothing more than heavy doses of cartoon violence. Can't argue with that!

07 - Hebocon report - It also turns out that people who like Japanese stuff and who go to conventions really like to watch reports about Japanese conventions, especially ones about crappy robots. This was one of the highlights of this year's Hell.

08 - Robot King - Speaking of crappy robots, boy, do these guys ever suck.

09 - "Sausage Samba" by Friendly Rich - Yes, the song is in English. He's singing about meat. No, really.

10 - Moments of Wonder: Winston Churchill - And now, this year's educational segment, courtesy of the ever insightful Philomena Cunk.

11 - Revenge of the Ninja trailer - Remember, only a ninja can kill a ninja. Sadly, I accidentally played a variant of the trailer that featured absolutely no belt buckle shuriken, but I've linked to the superior version here. That said, when Sho Kosugi is involved you can only go so wrong.

12 - Transformers: Age of Extinction (10 Guaranteed Improvements) - And we're back to crappy robots, though immeasurably improved by the Auralnauts. This was the other popular favorite of the year.

14 - I Live In The Woods - Random cartoon weirdness, round one.

16 - The Magic Christmas Tree trailer - Absolutely no adults will be admitted without children!

17 - Clocking Out - With special thanks to Bottom Shelf Films and, of course, Vince Lowe.

20 - Dickens Fruit Corners - And now a word from our commercial sponsor.

21 - "Bibi Hendl" by Takeo Ischi - "Who likes Japanese pop music?" Featuring a wonderful bit of serendipity in the form of a surprise appearance by Cafe Hell.

23 - Dr. Black and Mr. Hyde trailer (NSFW) - The previous clip was a bit heavy, so it was obviously time to switch it up with something wildly gratuitous.

24 - V for Varoufakis - This year's current events segment was provided courtesy of that endless font of humor, the Germans.

25 - The Obvious Child - Presented without commentary to a crowd that sat there quietly for twelve solid minutes trying to figure out what in the fuck was happening to them.

Outro: "The Time is Now" by John Cena

As ever, kudos to Animazement's stalwart Hellions: Cameron Blashka, Jared Blashka, and Chris Culpepper. Also, thanks to William Bloodworth for providing this year's flyer.