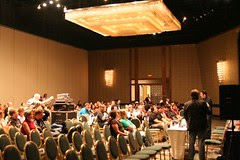 It was an OtakuHELL of firsts. Shiokazecon was the first OtakuHELL of the year and it was the first time we tried to have a HELLraffle. At certain points during the show (For example when the AnimeHELL Gremlins delayed the show) Nurse Katie would pull a name from the HELL-o-lantern and we'd give the winner a TOTALLY LAME ANIME DVD. 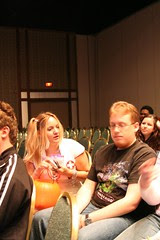 Besides being a fun filled give away the HELLraffle allowed me to do a little data mining. At the bottom of the raffle ticket I asked: "Is this your first HELL?" The results were surprising. At least to me:

I'm not sure what to make of that.

It's been decided that the HELLraffle was a big success and you can look forward to another big HELL drawing at A-Kon in June. 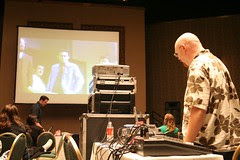 OtakuHELL was held in Panel Room One, which turned out to be a sub-section of Main Events. This was in fact the largest room I'd ever done a HELL in. And it was outfitted with a fantastic sound system and an excellent video projector. The Shiokazecon AV staff had done an incredible job setting the room up. It made for a great show. 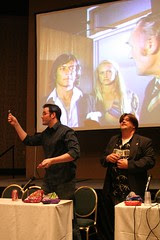 After years of fine tuning I've assembled a crack team to assist me with the show. I started with International Author of DRAW MANGA Bruce Lewis on the mic. Then I added Voice Actor Michael Tatum (You may have heard him as Rikichi in SAMURAI 7) on another mic. Together they fight crime, and they chat up the audience and throw candy and basically entertain while I'm cueing up the clips. This con we were joined by Nurse Katie who assisted those souls who were overwhelmed by the horrors of OtakuHELL. And Nurse Katie helped with the raffle, too. And last but not least the whole shebang was recorded by Joshua Roberts who took all these cool photos. Thanks Josh. Go team! 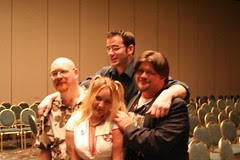 As usual the show was a freeform affair. I didn't keep a running list of what was played, so you'll just have to take my word that it went pretty well. I'd like to thank the dozen folks who stuck with us to the bloody end. We love you guys. 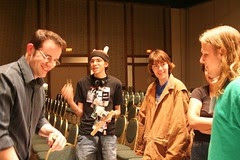 I hope to see you at the A-Kon show!

Check out the entire gallery of OtakuHELL HERE

animehell
Posted by Unknown at 8:39 AM

That's neat. I didn't know there were DVD's for "Thunder Prince" out now. Love to replace a crappy VHS copy I have of that flick! Hopefully they might have them at Wal-Mart (if I bother going back). Also haven't seen or heard of "Space Transformers" either, so this should prove interesting to find.

The quality of the THUNDER PRINCE DVD is about the same as my VHS tape. Makes you wonder what they used for the source they digitized.

SPACE TRANSFORMERS is a repackaged DIATRON 5. Your encode of DIATRON 5 is much better then this DVD.

Yeah, I found both of these at WalMart. There's suppose to be two more Korean anime DVDs on the shelf at WalMart: SOLAR ADVENTURE and RAIDERS OF GALAXY. I'm still looking for those...

I forgot to mention that they were having the rave/dance on the other side of the room partition. And while we'd occasionally hear the music and some cheers it wasn't too bad. In fact I understand that they'd hear our laughter over the music over at the dance...

At 8:01 AM, Tohoscope said…
The quality of the THUNDER PRINCE DVD is about the same as my VHS tape. Makes you wonder what they used for the source they digitized.

Yeah, I pretty much recorded my copy to DVD already (wasn't a great tape as it was in EP mode anyway).

SPACE TRANSFORMERS is a repackaged DIATRON 5. Your encode of DIATRON 5 is much better then this DVD.

I bet! (at times I want to believe I have the master 3/4" U-matic tape in my collection)

There are times when I feel rather impressed with what I do find and exploit out there. I feel I do a better job than those PD companies can get out of making crappy covers and pressing discs that don't work in most machines.

Someone in a forum I belong too just brought up that DigiView had somewhat presented a copy of the Friz Freleng cartoon "Fresh Hare", but with this final shot shown censored...
http://forums.goldenagecartoons.com/attachment.php?attachmentid=1363

I'm actually surprised a company like this is being 'responsible' about the whole PC thing, but this is rediculous! Still can't get over the oddball stuff they sometimes get away with releaseing in their "Cartoon Craze" series that isn't of the 'Golden Age' period and produced outside the US to boot (just seems so unusal against most releases, though they've stolen material from a pal of mine whose done the same thing a decade ago, but in a different venue).

Getting back to your message!

Yeah, I found both of these at WalMart.

That's what I figure. I'm still not sure if the ones in my town sell Pocky or not, since that sounds like something the "SuperCenters" handle, but not the regular stores. I already hate losing the old "Media Play" location I used to go for movies and such, and the closest place that sells a Pocky knock-off is a Korean import shop just a mile south of me, so it's Pepero if or whenever they're out of Pocky (Glico really needs to get into licensing their brands to some American company to make like what Cadbury did, unless a US subsidiary isn't out of the question).

There's suppose to be two more Korean anime DVDs on the shelf at WalMart: SOLAR ADVENTURE and RAIDERS OF GALAXY. I'm still looking for those...

Well I'll probably be heading out to mine sometime early next week, and if I do see those two, I'll buy extras and mail 'em to you if that's alright (you still owe me Zambot 3).

I wondered why I made extra copys of ZAMBOT 3. I'll get 'em in the mail ASAP.

Just to update, I went to Wal-Mart today and found all those DVDs you've stated!

Couldn't buy extras though as I was pretty short this time around, I also didn't pick up SPACE TRANSFORMERS and THUNDER PRINCE (you've insisted), so I made out with some good titles including THE WONDERFUL GALAXY OF OZ, RAIDERS OF GALAXY, SOLAR ADVENTURE, nad also the THUMBELINA and HUCK & TOM'S MISSISSIPPI ADVENTURE discs they had as well.

Perhaps I might just burn copies of them for you anyway in exchange for the Zambot 3 stuff!

Just to update, you should try to pick up "Solar Adventure", on the surface, it's just like all the others, but rather odd catch is it's use of live-action sequences that bracketed the animation inbetween, that comes off as blatent South Korean propaganda over defending itself from the North, as the whohle filme revolves around spies from the north who cross over and nearly stages an attack if it wasn't for a few slip-ups and a bunch of kids who dream up a cheapo giant robot anime for the duration, but it's rather funny how the HK people bothered dubbing this, and for it to be released at Wal-Marts in tnis day and age!

I just stopped by the WalMart superstore and couldn't find any of the other Digiview DVDs. They had every CARTOON CRAZE dollar DVD, but no SOLAR ADVENTURE.

At 2:04 PM, Tohoscope said…
I just stopped by the WalMart superstore and couldn't find any of the other Digiview DVDs. They had every CARTOON CRAZE dollar DVD, but no SOLAR ADVENTURE.

Sucks to hear that. I'm not sure where I come off being lucky as usual. People probably just don't pay attention to those DVDs at all where I am (and I'm the only one that dense enough to bother buying them in the first place, then burn off digital backups and pawn them off at the end of the day). I consider it a job well done!

Hopefully you can, it's rather too funny what they did with it. Here's some clips of what to expect from this...
http://nandakorea.sakura.ne.jp/koreanihtml/c_18.html

Aaron over at "Weekly Anime Review" just reviewed "Defenders of Space" on his podcast and made a mention of seeing "Solar Adventure" too...
http://weeklyanimereview.libsyn.com/index.php?post_id=89776